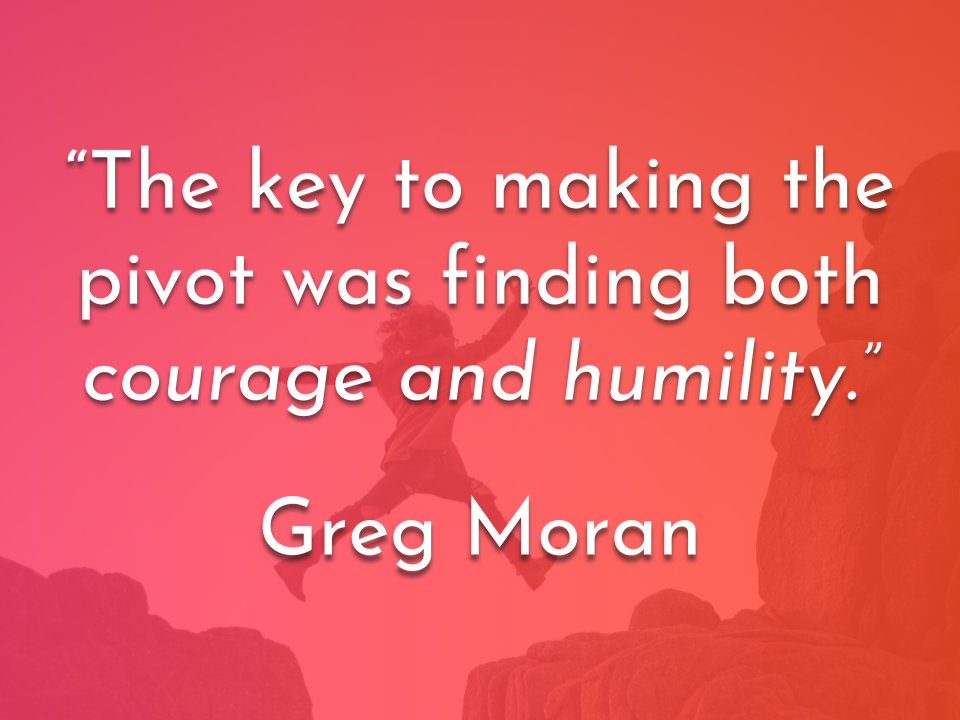 This is a guest blog by Greg Moran as a companion to the Voice America show aired on September 4, 2018, Leadership Happy Hour: Aspirations- Fuel for Results. This show was a conversation with Greg Moran and Terri Bettinger with host Maureen Metcalf.

During that episode, we explored ways that aspiration affects outcomes – particularly as it relates to people in their careers. What people believe is possible in their lives has a huge impact on what they end up getting accomplished. Our dreams/vision statements/goals (pick your word) initiate the creative tension in us that drives us forward until we achieve. In the words of Johann Wolfgang von Goethe: “Whatever you can do or dream you can, begin it; boldness has genius, power and magic in it.”

As a follow on to this discussion, I wanted to illustrate using my own life as an example. In May of 2016, I left a highly compensated job at a Fortune 100 company. Over the ensuing months, I did some consulting, began working with a fledgling startup and did the normal headhunter thing. I ended up picking 2 companies to interview with and received C level offers from both, the lower of which was a 30% raise from what I’d been making in my last job. I ended up turning down both job offers and taking a 90% pay cut from what I could’ve been making to join the fledgling startup. This seems like an odd move for a 51-year-old at the peak of his earning curve. So why did I do it?

How can taking a pay cut and giving up all my resources as a C level exec be aspirational? Seriously, I went from having 2,000 people on my team (my team was large enough that I had a group that did nothing but report the operational data from my shop) to being one of the people that regularly take the trash out at a startup.

For me, it is all about learning and growing. As I evaluated my future back in the summer of 2016, I realized that going back into a corporate role was not going to teach me anything – in fact the reason I got the offers is because I knew the answers to all the questions the CEO’s threw at me. I found I was experiencing a strong allergic reaction to re-entering the corporate world with little hope of growth.

What excited me about the startup, now known as Wiretap, was the chance to not only work on a worthy product with a small group of people I trusted and shared values with, but also the chance to learn and grow. I was energized by the challenge of re-inventing myself as a professional who knew how to start a company and build a value chain from scratch. I was energized by the challenge of completely re-booting my professional network from a bunch of corporate staffers and the people that sold stuff to them to the people who fund and grow companies. I honestly knew nothing meaningful about that world.

The key to this was finding both courage and humility. The courage was about believing – aspiring to successfully launch a company. The humility is about accepting the reality that any prior success or power/resources tied to my past positions and success were almost completely irrelevant in this new context. On top of that, I had to re-create all my mental models about risk, leadership, capital deployment, etc.

So, how’s it going? IT.HAS.BEEN.AWESOME! …not because I’ve achieved some big pay day (that is not my goal – I would consider this pivot a staggering success if I broke even on my corporate career), but rather because I found once again the joy and power of aspiration when you don’t know the answers or even the destination. The power of not knowing the answers but believing you can find them. Feeling compelled to work hard to find the answers – not because they seem impossible (though sometimes they do), but because you believe in your soul that they are possible. Embracing the pressure of knowing that if you don’t solve the problems you face, then a lot of people you are on this journey with won’t get to experience the high of doing something that very few people truly get to do. We are giving life to a new organization – a community that has a unique culture and a set of differentiated capabilities that has never existed in the world before!

I’ll pause there with this story, because there are many chapters to write and I must get back to work! If you are still unclear of the message, go back and re-read the Goethe quote 3 times. Cheers to a 2019 filled with aspiration in your life!

Greg Moran is a C-level digital, strategy and change leadership executive with extensive global operations experience. He is the COO of Wiretap in Columbus and sits on the board of Koios Medical in NYC. He led corporate strategy for Ford and designed the plan that Alan Mullaly used to turn around the company. Greg held C-level IT positions in app dev, infrastructure and core banking applications at Ford, Nationwide Insurance and Bank One/JPMC, respectively. He began his career in consulting with Arthur Andersen/Accenture, working across industries with ~100 companies over the course of a decade. He is passionate about leadership and culture and teaches part time on the topic at Ohio University.