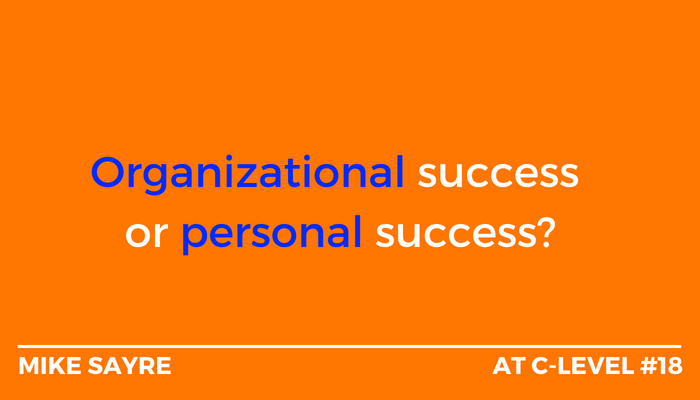 Mike Sayre is a highly experienced and successful software, e-commerce, and manufacturing services CEO, COO, CFO, and Board Director. He is also the president & COO of Metcalf & Associates, a trusted partner inspiring and enabling perpetual innovation, evolution, and growth in leaders and their businesses. Mike was featured in Maureen Metcalf’s May 2017 Innovative Leaders Driving Thriving Organizations interview on VoiceAmerica entitled “7 Characteristics of Leadership 2020 In Practice: A CEO Story.”

This is the wrap-up of a 9-blog series on real-life organizational transformations, At C-Level #10-18.

In At C-Level #10-17, I wrote about three successful transformations I’ve had the opportunity to lead in my career so far, using a seven-step transformation model closely aligned with the Metcalf & Associate’s Innovative Leadership Transformation Model below.

Prior to this series, in At C-Level #9, I wrote about leadership for an increasingly complex world. I believe the exponentially increasing rate of change and complexity in technologies, our organizations, and the world in general – today and for the foreseeable future – will increasingly require the application of the Level 5 and Strategist leadership competencies discussed in that blog for long term organizational and personal leadership success.

As a reminder, the competencies of Level 5 or Strategist leaders include:

In this large manufacturing company, focusing on the organization’s mission, recognizing my own shortcomings in company history and experience, pulling in people who could make up for my shortcomings and collaborating with them to figure out the best ways to achieve our vision, resulted in

Some believe that to get ahead in a large organization you must be very competitive and aggressive at the expense of others. The challenge I had with a previous organization. However, I believe that paradigm is, by necessity, dying a slow death. I also believe that if you focus on getting done what is in the best interest of the company and its stakeholders, and are aggressive in your own self-development and ability to lead and get positive results benefiting your organization, the opportunities will present themselves, even if they sometimes end up with you being in a new organization.

In this, my first, CEO role, I came to realize the importance of understanding the needs of all of our stakeholders (a 360-degree or “balcony” view of our business). They were all taking significant risks in supporting the company. Investors and bankers were putting in their hard-earned money; customers were risking the quality and delivery of their products by putting our products went into theirs; our employees were betting their livelihood and family’s health on our success; suppliers were spending their capacity and resources to fulfill our needs; and the communities in which we operated were depending on our economic success and good citizenship. In any major decision, and even in some minor ones, the team and I had to keep these dependencies in mind and do our best to maximize the success of all five stakeholder groups the best we could. We all carried a small card spelling it all out, and we referred to that card all the time.

In addition, the company culture had not kept up with the company’s early commercial success and was challenging, at best, when it came to supporting all of our stakeholders and growing the company. So we also codified our values on the back of that small card, referred to them all the time, and, more importantly, were unwavering in upholding those values, even in the most difficult situations.

Similar to the large manufacturing company story, focusing on the company’s success and collaborating with the rest of the experts on the team, as well as the combination of 360-degree thinking and our unwavering commitment to take the right actions based on our vision and values, totally transformed this organization, resulting in an eventual sale to a global industry leader who realized the value in the organization we had created.

From a personal standpoint, I was first the company’s CFO, doing whatever I thought best for the company, before being asked to become its CEO.

While working through the transfer issue, plus several other issues that came up during the engagement, that values list was given by the finance team to others in the company. I also started attending the weekly leadership meetings working on other challenges around the company, and just trying to make the company better. My intellectual versatility is in my interest in learning about different businesses, business models and people’s perspectives in varying industries – it’s curiosity. Learning gives me energy, and the capability of developing new ways of thinking about old and new challenges in different situations.

As several months passed, I was asked to join the company as its President & COO and help the team build more value in the company for its owner. By then, my 360-degree view of the business revealed a highly evolving organization and operating environment, in constant change, suffering from instability, inconsistency, operational silos, and distrust – resulting from a distinct lack of consistent and clear communications. Common challenges in growing businesses.

In my view, the people in the organization needed shared goals and incentives to give them more reasons to communicate and collaborate. So, I implemented a profit sharing plan for all employees, as well as a plan for the leadership team to personally benefit from that value creation, so everyone would gain from our collective successes.

I was a little off in thinking that money would be a strong motivator for this group. But I was still going in the right direction. More than the potential for additional pay and bonuses, these plans created a whole new level of transparency about the company’s financials. Trust continued to build, our Agile implementation resulted in more cross-functional collaboration, we made major improvements in our performance, we coalesced as a team, we had great success in turning the business around, and we had fun!

The company’s value increased 3X in less than two years. In the process, I advanced from consultant to President & COO, thoroughly enjoyed my time with the company, and benefitted from an eventual majority interest sale of the company with rest of the leadership team.

I hope you have enjoyed the transformation part of this series.  Just writing about these transformations has brought back many great memories. But, more importantly, taking the time to reflect back and write about them has been another great learning experience for me as well.

Thanks for following us!  Please look for new At C-Level blogs over the next several weeks!

The Mind of a Leader: How to Lead Yourself, Your People and Your Organizati...
Scroll to top