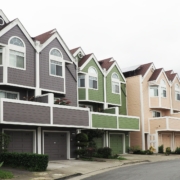 This week’s article is provided by Dr. John A. Kilpatrick, an economist specializing in real estate investment and housing issues. It is a companion to his interview on Innovating Leadership, Co-creating Our Future titled What Leaders Need to Know About Circular Economy that aired on Tuesday, December 7th, 2021.

There is an economics story making the rounds about the coal miner and the coal mine owner each buying a new pair of work boots. A cheap pair costs $5 and will last a season. A better pair will cost $20 and last five seasons. Unfortunately, the coal miner is never able to squeeze together $20, and so each season is only able to buy a $5 pair. The coal mine owner, of course, can afford the better pair. At the end of 5 years, the coal miner has spent more money than the boss ($25 versus $20) and has thrown away 5 pairs of used boots.

We have a not dissimilar problem at the heart of the world’s very significant housing crisis. It is most obviously manifested in the lack of housing affordability but is inextricably tied to the life-cycle wastage in housing resources.

Globally, housing now costs an economically unsustainable portion of a working person’s budget. Inseparable from housing affordability is housing availability. At the bottom rung of the economic ladder, housing is simply not to be had. Gregg Colburn, a real estate professor at the University of Washington, has done ground-breaking empirical research into the homeless problem to arrive at an extraordinarily simple finding – cities with the most expensive housing have the most significant problems with homelessness.

Attempts to address the problem since World War II may have actually made the problem worse and almost certainly violated the principles of a circular economy. For example, after WW-II, in the UK, vast arrays of temporary “modular” housing was constructed to address the immediate shortages. These homes were designed to have 10-year life spans, but in many corners of the UK these flimsy dwellings are still standing. As an ironic side note, many of these pre-fabs contained asbestos, lead-based paint, and other structural problems. In the US, many modular units such as mobile homes were purposely built to the most cost-cutting standards and had significantly foreshortened lifespans and lack of future adaptability compared to traditional stick-built, site-built homes. Interestingly enough, these flimsy substitutes were considered the new modern convenience in the 1950’s and promoted in movies such as the Lucile Ball – Desi Arnez hit, “The Long, Long Trailer.”

In Japan, the problem has been exacerbated by stylistic choices. Newer homes have been highly preferred to older homes. Japan saw a wave of post-war construction, but “new” and “modern” became more fashionable, and each passing decade has seen older homes become valueless in as short as 20-30 years. As such, homes in Japan are not built to last, and in some suburban towns, homes built in the 1960’s are no longer standing.

Apartment dwelling has proven to be no solution, and in fact has contributed to the wastage problem. Post-war apartment buildings were often constructed with 30-40 year economic lives. After that, the cost of replacing mechanical systems, tired or failed window and door systems, and overall heightened maintenance favors tear-down and replacement rather than rehabilitation.

This race to the bottom in housing quality and the shortening of the economic lifespan of housing inevitably drives up the long-term cost of providing adequate housing to a growing population. While short-life-span housing may have an attractive up-front cost, the need for regular replacement drives up the cost and saps resources. In short, workers needing a roof over their heads have been forced to invest in the housing equivalent of $5, disposable boots.

At the core of the concept of a circular economy is the notion of reducing the price consumption by extending the lifespan of the goods consumed, in this case, housing. Finding a sustainable, circular solution to the simultaneous problems of housing cost and housing lifespans will not be simple. For one, health and safety standards today mandate materials and systems that were either unknown or had unacceptable substitutes in past generations. Examples include adequate and cost-efficient heating, cooling, and ventilation, window and door systems that contribute to energy efficiency, improved sanitary facilities, and kitchen and utility appliances that optimize the time spent on cooking and cleaning. These systems have short life spans, and remodeling/rehab have not proven to be efficient solutions in the past.

There is however significant research underway. The 2016 African Real Estate Society Conference, held in Addis Ababa, was devoted to sustainable development. Architecture and design researchers from universities in the Netherlands are presently working with colleagues in Malaysia where housing demand and affordability are nearing crisis levels. By designing future flexibility into housing units, they hope to simultaneously conquer the affordability problem for younger consumers, the space availability problems of growing families, and even the downsizing issues of empty nesters. Researchers in Australia and Germany are focusing on the results of the 100 Resilient Cities Program (100RC) developed by the Rockefeller Foundation in 2013, which aims for “the capacity of individuals, communities, institutions, businesses, and systems within a city to survive, adapt, and grow, no matter what kinds of chronic stresses and acute shocks they experience”.

The Houseful Project, sponsored by Housing Europe, kicked off in 2019 with three themes related to housing and the circular economy: Integration of circular solutions in energy efficiency, further development of feasible circular economy business opportunities in the housing sector, and identifying buildings that are willing to implement some of the tested solutions. These solutions include, but are not limited to, containment of materials wastage in the construction process, improvement in the handling of wastewater, and energy conservation.

Australia has been a focal point for much of the research on this topic. In that country alone, over 20 million tons of waste from the construction industry are sent to landfills each year. The Royal Melbourne Institute of Technology and several other universities, with funding from the Australian Housing and Urban Research Institute, hopes to address these and related issues and help guide that country’s housing production toward increased sustainability. Finally, just this month at Canada’s McGill University, researchers held a webinar to address the problem of information silos related to housing and the circular economy, and to find ways to more efficiently share data and methods.

Housing faces real problems in affordability and availability. Increasingly, the housing sector is recognizing that adopting the precepts of a circular economy is a way of holistically addressing these issues.

Dr. John A. Kilpatrick is an economist specializing in real estate investment and housing issues.  He is Managing Director of Greenfield Advisors, based in Seattle, and also serves as a Director of the Washington State Economic Development Finance Authority. Is an author or contributing author of 10 books, most recently Real Estate Valuation and Strategy (McGraw Hill, 2020).

Photo by Marcus Lenk on Unsplash