Blog
You are here: Home1 / Blog2 / Books3 / Ethics Violation: A Practical Example on Gathering All the Facts 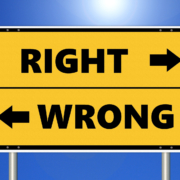 The primary guidance I have for those who find themselves in a position of having to work out appropriate consequences is: put on your ethics goggles and be intentional. At every stage of this process, every leader involved should strive for fairness and honesty and be able to understand how decisions come across not just to those involved but to other employees.

Let’s work through a fictional example that will ground some of these ideas. Milo has spent the last year working as a logistics manager for a family-owned furniture company with 150 employees. The company has a code of ethics that includes a $100 limit on gifts. Milo’s administrative assistant, who is the nephew of the owner, mentioned to his uncle that Milo accepted a pair of Stanley Cup playoff tickets worth $500 from a shipping partner.

The owner calls Milo’s manager and learns that Milo is an excellent employee who has never had any other complaint lodged against him. Next, the owner talks to Milo, who says he realizes that he was supposed to read the ethics statement but he never got around to it. He relates that at his last company, there was no policy about gift limits, so he did not think to check when the tickets arrived. He apologizes and appears genuinely upset to learn that he violated this rule. Not only was Milo contrite, he offered to call the vendor who gave him the tickets and reimburse the value.

Milo screwed up here, no question. He was careless . . . but, far as I can tell, not devious. Based on these facts, I’d probably advise the owner to give Milo a stern verbal warning. I’d be sure to say if he did this again, there would be serious consequences. I’d reinforce that he must read the code of ethics. I would remind Milo that he should not retaliate in any way against his admin, who had every right and arguably a duty to report his violation. If he’s already used the tickets, Milo probably should reimburse the shipper and explain that he made a mistake, in part so that the furniture company is not seen as a partner where high-value gifts are expected or appropriate.

This may seem lenient. The company has every right to “throw the book” at Milo . . . but he seems like a very good employee who made a mistake. Demonstrating compassion and thoughtfulness in this case might create an opportunity for the owner to remind everyone to reread the code of ethics, and thus prevent more problems. There is no mandated confidentiality involved in a verbal warning, and so Milo and his admin can talk about what happened, and others who might have questions can raise them as well.

So, let’s call that scenario one. Now, let’s alter the facts a bit.

What if Milo gets angry and defensive when asked about the tickets? What if Milo’s admin says that this is the third or fourth time the shipper has sent Milo tickets for a sporting event or a concert and that he has warned him several times that accepting the tickets is a violation of company policy? What if Milo’s manager says that Milo suggested the company shift more business to this shipper . . . just a few days after the shipper sent him the tickets?

In the second scenario, the results of the investigation suggest that Milo has engineered a relationship with the shipping partner that is a conflict of interest. So here we have two identical offense reports, but the details elevate the second scenario to a much more serious level. They may suggest a deliberate bribe by an employee of the shipper, and they may be significant enough to warrant terminating Milo immediately.

Wow, harsh. Terminating an employee can be catastrophic for that individual, and it can hobble a work team. It should never be done lightly, but some offenses, like sexual harassment or fraud or bribery, are so serious that once you have established that they occurred, you must act decisively and signal that this is unacceptable behavior.

As Milo’s example shows, the facts and details always matter. Intentions are important. Mistakes are different from premeditated acts. Investigations must be fair and full, approached objectively.

In the corporate world, disciplining an employee for a code violation is a necessary part of the integrity process. And I’ll be honest: it’s my least favorite part. While it’s fun and energizing to write a code of ethics and feel like you are shaping a great company where everyone will be proud to work, it can be infuriating, frustrating, and sad when someone violates that code. Sometimes people, for a wide variety of reasons, can make consequential mistakes that cost them their jobs, put their families’ financial stability in jeopardy, and create a permanent stain on their reputations—and the company’s as well. But you have to respond, or your code will have no credibility. You’ll fail as a leader, and the people who follow the rules will suffer.

Rob Chesnut is the Chief Ethics Officer at Airbnb, a role he took on in late 2019 after nearly four years as the company’s General Counsel. He previously led eBay’s North America legal team, where he founded the Internet’s first ecommerce person to person platform Trust and Safety team. He was the general counsel at Chegg, Inc. for nearly 6 years, and he served 14 years with the U.S. Justice Department.