Blog
You are here: Home1 / Blog2 / Books3 / For Zs, Choosing to Work Somewhere Isn’t Just About Making a Career Choice. I... 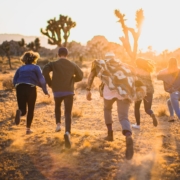 This week’s article is by AnneMarie Hayek, a cultural consultant and generational expert.  It is a companion to her interview on Innovating Leadership, Co-creating Our Future titled The Power and Promise of Generation Z that aired on Tuesday, October 5th, 2021.

Recently, some members of my team at ZSpeak (all between the ages of 19 and 24, placing them squarely at the upper age range of Generation Z) hit me with a bombshell. It all came about when I asked them how they make career decisions.

As someone who’s spent years studying generational evolution, I wanted to hear from them how their decision-making process compared to that of millennials. Plus, the organizations I consult for are often desperate to find better ways to recruit this new generation—because, far too often, they’re missing the mark in hiring effectively.

What I learned from my Zs was eye-opening, and the further research we’ve done supports what they shared. Turns out, when Zs make employment decisions, they view it as casting a vote for the kind of world they want to build.

This is a far cry from millennials and reinforces an important lesson for employers: Zs are not simply younger versions of their predecessors. If you engage with Zs the way you would a millennial job candidate, they’ll quickly move on. However, if you understand who Zs are and how to give them what they want—something I’ll walk you through in this article—you’ll be far more successful in attracting and retaining talented Zs.

Zs Are Not Millennials

To understand why Zs look at their career choices as a vote toward building the future they want, you first have to understand one fundamental truth: Zs grew up completely differently from millennials, which means they have wildly different career priorities.

Millennials are the “Instagram” generation. People shared often-superficial, filtered posts intended to show how perfect their lives were. As a result, millennials gravitated towards the appearance of fun and perfection. Employers recognized this and focused on offering perks in their workplaces: cool outings, game rooms, baristas, and more.

Zs, on the other hand, grew up with 24/7 digital access to all that’s real and raw in the world. They’re the “TikTok” generation: they see the world as-is, without filters and superficiality. Because of that, they gravitate towards things of substance.

To Zs, perks feel contrived and fake. They don’t care about the rooftop views or the double caramel macchiato frappuccinos; they care about good pay, health care, and mental health support. When they are considering prospective employers, they’ll “cast their vote” by working for the ones who support healthy, employee-centered workplaces.

The Creator Generation is Here

While important to Zs, a company’s compensation and benefits package is just one consideration. Unlike millennials, who grew up consuming content through their social feeds, Zs grew up creating content via platforms like TikTok, YouTube, and even Minecraft.

As a result, Zs don’t want to simply “work;” they want to be given a voice and the ability to express themselves creatively. They’re ushering in a radical explosion in the Creator economy: there are now 32 million digital creators. Zs are savvy about monetizing their creativity—they know that anyone with more than 500 followers can make money as a creator online.

Zs sees the traditional 9–5 job as just one of many career options. If they don’t like their corporate options, they’ll create their own. To attract them, then, companies must prove to Zs they value their unique perspective and talents. If they don’t, Zs will look elsewhere.

From the Individual to the Collective

Millennials entered the workforce at the height of startup culture, which romanticized the 24/7 hustle and was defined by a marketplace in which each individual had to fend for themselves, with little loyalty on either side.

Zs have grown up in a world of constant instability. Through their devices, they’re continually exposed to the climate crisis, gender and racial inequality, and deep political divides. They’ve also experienced turbulent economic periods and a global pandemic. As a result, they crave security and are far more interested in collective wellbeing than an individualistic orientation.

This devotion to the collective means Zs are willing to stand up for what they believe is right—together. They will advocate for better work, pay, and benefits, just as they will for climate regulations, gun control, and racial justice. Collectively, Zs know they hold incredible power. They view who they work for as a vote about how people are treated, who is represented, and who holds the power—and once they cast that vote, they will stay with those companies.

Do’s and Don’ts of Recruiting Zs

Given all this, when it comes to recruiting Zs to your workforce, there are a few things to keep in mind. First, clearly outline the requirements of the position upfront. Be transparent about salary, benefits, and responsibilities. This is far more effective than relying on vague buzzwords (“digital ninja,” “boss babe,” “marketing rockstar,” “guru,” and so on).

Next, spend more of your budget on comprehensive benefits (rather than perks), paid time off (PTO), and fair wages. Zs are looking for security and reliability, not trendy office snack bars.

Finally, don’t gloss over your company’s culture, values, and impact. Zs believe companies have a responsibility to address environmental and social issues. They want to see that you recruit under-represented communities: women, people of color, immigrants, bilingual and bicultural individuals, as well as members of the lesbian, gay, bisexual, and transgender communities.

Remember, above all else, Zs think of their employment decisions as casting a vote, and they are determined to work for places that positively impact the world.

For more on how Generation Z is impacting the workforce and the world, go to annemariehayek.com or find We Generation on Amazon.

AnneMarie Hayek is a cultural consultant, generational expert, and social agitator who deeply understands society’s evolutions. She founded and leads two companies, Global Mosaic and ZSpeak, with a passion for navigating the cultural movements shaping our world. AnneMarie and her team of experts have advised the world’s largest companies, organizations, governments, and presidential candidates for more than twenty-five years. She has a graduate degree from the University of Chicago and previously served as SVP and VP of Global Strategy at BBDO and Leo Burnett.

Photo by Jed Villejo on Unsplash