Insights
You are here: Home1 / Insights2 / Recommended books3 / How to Turn a Reorganization Into a Leadership Disaster 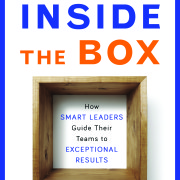 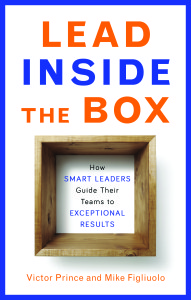 Today’s guest post is by Mike Figliuolo, co-author of Lead Inside the Box: How Smart Leaders Guide Their Teams to Exceptional Results (you can get your copy by clicking here).  You can learn more about Mike and the book at the end of the post.  Here’s Mike:

Quite often, departments are combined, split, or a team’s purpose is redefined. Reorganizations are disquieting. Leaders in this role face several challenges the Leadership Matrix can help them overcome. First, they have to evaluate the performance of team members with whom they haven’t worked before. Second, as responsibilities change, a team member who was a high performer on one set of tasks might find themselves struggling with their new role. The Leadership Matrix makes it easier for leaders to assess these new team dynamics and apply their energy appropriately.

You can use the Leadership Matrix to assess your new team members, especially if you haven’t worked with them before. One of your primary goals when you lead a team through a reorganization is defining roles quickly and in a manner that puts everyone’s talents to best use. The Leadership Matrix can be a powerful tool for making that happen.

During your assessment of the new team, watch out for negative impacts arising from changing someone’s role. As you shift around responsibilities, be aware of situations where you might be giving someone more than they can handle. We’re not saying you shouldn’t change their roles. Such changes can be great growth opportunities. What we are advocating is being aware of the possible shift in the person’s performance that is a result of their new responsibilities. If you know this risk exists, you can take mitigating actions before it becomes a major problem.

Sally serves as a great example of what can happen if a leader isn’t mindful of a reorganization’s impact on a team’s performance. She was responsible for running the operations group in a business unit at a professional services firm. During a major reorganization, Sally’s boss, the business unit president, was moved to another role in the company. Sally then took over his role as the business unit president. Her team now consisted of the operations group she previously led, a strategy group, an infrastructure group, a finance group, and a marketing group.

When Sally took over the business unit, she wanted to show everyone she was in charge. She felt a bit insecure in her new role and felt the best way to demonstrate competence was to exercise her newfound authority. For her, this meant unilaterally changing Rose’s role.

Sally didn’t solicit any input from Rose even though she had previously been a peer. Instead, Sally decided on her own to break Rose’s team up and reassign responsibilities for the infrastructure group. Instead of reporting to Rose, that team would now report directly to Sally. Rose’s role was reduced back to what she had a year ago – she was now only responsible for the strategy group.

Rose found these changes demoralizing. She asked Sally to reconsider the reorganization and voiced her frustration with the move. Sally’s response was “Well, I’m running the team now. I think it makes more sense this way. You go focus on strategy and leave the infrastructure to me.” Sally wasn’t going to budge on her decision.

Rose gave up any hope of succeeding in the environment Sally had created. Her career path had been derailed and there was nothing she could do about it. She went from being a Rising Star to being a Slacker. She stopped putting forth her usual tremendous efforts and instead began looking for a new job.

Sally pushed Rose to focus on the strategy group but Rose’s heart wasn’t in it. After a couple of months, Rose left the company to go pursue her own entrepreneurial venture where her growth wouldn’t be limited like it was with Sally. By failing to assess the impacts reorganizing the team would have on her high performers, Sally lost a great talent. That loss led others to leave the organization too. Sally’s team’s performance dropped precipitously as high performers fled to roles where they felt more supported by their leader.

Sally’s failure to evaluate her team members’ performance and how she should interact with them had disastrous results. After a year of running the business unit, Sally was removed from the role by senior leadership. Had she conducted a thoughtful assessment of the situation before acting, she might have realized how her changes could affect her Rising Stars which could have prevented the exodus of talent from the team.

If you’re leading a reorganization, be sure to avoid Sally’s mistake. Spend time assessing your new team using the Leadership Matrix and weigh the impacts of changing responsibilities before you take action.

– Mike Figliuolo is the co-author of Lead Inside the Box: How Smart Leaders Guide Their Teams to Exceptional Results and the author of One Piece of Paper: The Simple Approach to Powerful, Personal Leadership.  He’s the managing director of thoughtLEADERS, LLC – a leadership development training firm.  An Honor Graduate from West Point, he served in the U.S. Army as a combat arms officer. Before founding his own company, he was an assistant professor at Duke University, a consultant at McKinsey & Co., and an executive at Capital One and Scotts Miracle-Gro.  He regularly writes about leadership on the thoughtLEADERS Blog.