Blog
You are here: Home / Blog / Applying Innovative Leadership / “I’m mad as hell and I’m not going to take it anymore!” 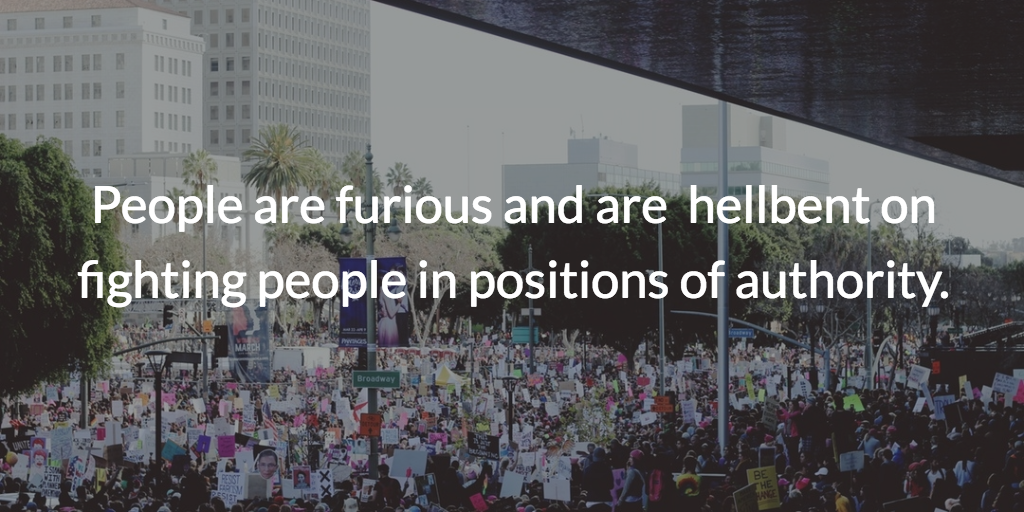 This blog is a companion to an interview with Barbara Kellerman on VoiceAmerica “Innovative Leaders Driving Thriving Organizations” on January 31, 2017 discussing the end of leadership as we know it and how the current landscape impacts the requirements of leaders going forward. This interview is one of the interviews conducted at the International Leadership Association Annual Conference.

This post was drawn from www.BarbaraKellerman.com posted on November 28, 2016 with permission. “One of the most iconic scenes in American film history is in Paddy Chayefsky’s 1976 black comedy, “Network.” Peter Finch stars as Howard Beale, a network news anchor who’s about to be canned because of declining ratings. Beale starts to unravel while he’s on the air. He becomes visibly unhinged, screaming at his viewing audience, urging them to do what he’s doing – to shout at the top of their lungs, “I’m mad as hell and I’m not going to take it anymore!”

The line came to mind while reading today’s New York Times, which testified yet again not only to how furious people are, but to how hell bent they are on fighting people in positions of authority.

• South Koreans, fed up with their president, Park Geun-hye, have taken to the streets in the hundreds of thousands to protest her refusal to respond to charges of corruption and influence peddling. South Korea’s worst political crisis in decades shows no signs of abating. Ms. Park remains defiant. The people remain defiant as well – demanding that she either resign or be impeached.

• The mayors of several of America’s largest cities have vowed to fight any order to deport illegal immigrants, even if instructed by the federal government to do so. Los Angeles’s Eric Garcetti, Chicago’s Rahm Emanuel, and New York’s Bill de Blasio, among others, have all pledged to fight the feds on this, even if it means losing millions of dollars in federal assistance.

• After decades of staying silent, at least six former English soccer players have come forward with accusations of sexual abuse by coaches affiliated with England’s Football Association. More than twenty other players have similarly stepped up, though anonymously. After a couple of weeks of doing nothing the Football Association concluded it had no choice but to announce it would investigate the claims. It appointed a lawyer experienced in such matters to pursue the case.

Who knew Howard Beale was forty years ahead of his time?!”

Thoughts from Maureen Metcalf: We as leaders are facing tough questions about how we navigate the range of challenges we are seeing daily. In the past we had more time to address changes that impacted our organizations. In recent times, we expect leaders to respond immediately. Barbara gives great suggestions in her interview about understanding our context and the needs of our followers as we respond.

In the past week, President Trump issued several executive orders. Leaders need to respond in a timely manner to issues such as those associated with immigration. I teach in a university and I was grateful to get an email from our President this morning that helped me understand the positon the university takes on how we respond to our colleagues and students. I was happy to see that her message matched my values.

In this polarized time, when we as leaders set organizational trajectory or respond to changes that come at us unexpectedly, our responses are bound to be unpopular with a number of constituents. Our responses need to be timely AND require an understanding of the organization, our constituents, the impact we have on them, the expectation of our funders, the expectation of our board and other key stakeholders like the community.

This is no small challenge and when done wrong, it can have long term implications. All of us in leadership roles there people look to us to set the tone need to be aware of the impact we are making on our teams, our clients and our communities. How do we help apply appropriate attention and deescalate the tension where it has become unhealthy?

Barbara Kellerman is the James MacGregor Burns Lecturer in Public Leadership at the Harvard Kennedy School. She is the Founding Executive Director of the School’s Center for Public Leadership. She was ranked by Forbes.com as among “Top 50 Business Thinkers” (2009) and by Leadership Excellence in top 15 of “thought leaders in management and leadership” (2008-09 and 2010-2011). In 2015 and 2016 she was ranked by Global Gurus as # 13 on the list of “World’s Top 30 Management Professionals.” In 2016 she was given the Lifetime Achievement Award by the International Leadership Association. Kellerman has appeared often on media outlets such as CBS, NBC, PBS, CNN, NPR, Reuters and BBC, and has contributed articles and reviews to the New York Times, the Washington Post, the Boston Globe, the Los Angeles Times, and the Harvard Business Review. Kellerman was cofounder of the International Leadership Association (ILA), and is author and editor of many books.

GET STARTED
A Tale of Two Leaders