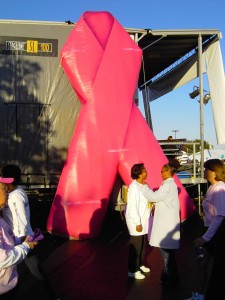 This is a guest post by Dani Robbins, a Metcalf & Associates, Inc. Associate.

As we all know by now, the Susan G. Komen Foundation Board of Directors adopted and then quickly revised (in response to fierce opposition) a policy that disallowed financial support to organizations that are under investigation, even politically motivated investigations, after a Florida Republican began an investigation into Planned Parenthood to assess if any Federal funding was being used to support abortions.

It all took less than a week, but during that week, some powerful leadership lessons emerged.

Let’s start in Philadelphia from whence the article entitled Komen foundation needs cure for backlash over Planned Parenthood cutoff hails. The article says ”The Susan G. Komen foundation, a behemoth in breast cancer philanthropy and creator of the immensely successful Race for the Cure brand, is battling a public-relations debacle. Within hours of Tuesday’s news that Komen would stop giving grants to Planned Parenthood for breast health services, donations began pouring in to the family planning organization while pink-ribbon crusaders vowed to cut Komen off.”

Talk about picking a hill to die on! Regardless of if you are pro choice or pro-life, love Planned Parenthood, love Komen, hate one, or hate the other, the Komen Board found themselves with a PR tsunami. NPR.org called it “one of the worst weeks in terms of public relations of any organization in recent memory.” And Komen is the PR queens of pink.

National Foundation Boards, like many Boards, tend to be filled with very smart, talented, passionate and connected people. I can only surmise that they greatly underestimated the ramifications of their decisions. Or that Board members who did not agree, also did not speak up! Stupid things happen, sometimes because they are allowed to happen.

The Washington Post reported ”Komen has been deluged with negative emails and Facebook postings, accusing it of knuckling under to pressure from anti-abortion groups, since The Associated Press reported on Tuesday that the charity was halting grants that Planned Parenthood affiliates used for breast exams and related services. The grants totaled $680,000 last year.” The article goes onto say “Besides $400,000 in smaller donations from 6,000 people, Planned Parenthood is receiving $250,000 from a family foundation in Dallas and a $250,000 pledge announced Thursday by New York Mayor Michael Bloomberg to match future donations.”

Leadership at any level is hard. Leaders make decisions. Some decisions will be unpopular. Some will be unwelcomed. Some will be unsafe for the leader but right for the organization. “Is this the hill you want to die on?” is a great question to ask before you charge forward.

It may well be the hill you want to die on. We all have values and when we’re lucky and intentional, we work at a place where the values of the company match our values. The question comes up less in this environment but it still comes up, especially if leadership, at the Board or senior level, changes.

What if the culture has changed around you? What if a board member/s or manager encourages you to do something you believe is unwise, or unethical or illegal? What if other Board members disagree but remain silent? What if you’re in charge and despite your best efforts to the contrary, you cannot align your values and the organizational values. In those circumstances, it may very well be the hill you want to die on.

What if your women focused work place decides to de-fund another women focused organization? Maybe you charge the hill. Maybe go away quietly. Where do the lines go between burning bridges and refusing to be a part of something that is abhorrent to you?

Mollie Williams, the Komen official who resigned to protest the organization’s decision to defund Planned Parenthood, managed to do both, and to do it brilliantly. She is quoted in The Atlantic as saying “Thank you for contacting me. As a public health professional, I must honor the confidentiality of my former employer, Susan G. Komen for the Cure, and for this reason, I ‘m not responding to questions about Komen’s decision to no longer fund Planned Parenthood. The divide between these two very important organizations saddens me. I am hopeful their passionate and courageous leaders, Nancy Brinker and Cecile Richards, can swiftly resolve this conflict in a manner that benefits the women they both serve.”

Now, you might note that other than offering respect, she didn’t say much, but then, again, she didn’t have to. Because she left, and that says it all.

To receive future blog posts in your mailbox, enter your name in the subscribe box on the right column.

GET STARTED
Vision and Values – The Antidote to Burnout? What Do Your Relationships Say About You?
Scroll to top