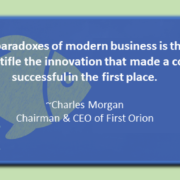 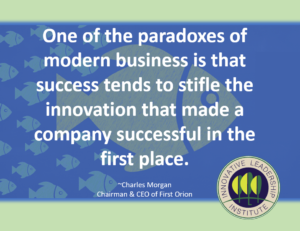 This blog is provided by Charles D. Morgan, CEO, First Orion Corporation, as a companion to his interview on Innovating Leadership, Co-creating Our Future. This interview The Biography of a Finally Successful Startup aired on 8/27/19.

One of the paradoxes of modern business is that success tends to stifle the innovation that made a company successful in the first place. If you think about it, that’s not all that hard to understand: Innovation breeds success, success breeds expansion, expansion breeds bureaucracy, bureaucracy breeds logjams and a kind of complacent short-sightedness, borne of the sheer weight of that success and the processes that support it. So companies that have become big and successful by creating a successful product tend to focus on continuing to make that product better or on improving the service around that product, rather than on doing the hard work of branching out – of creating something new and different. But this is a recipe for disaster. Today’s business world moves too fast, and if you don’t keep innovating, one of these days you’re not going to be around anymore.

Let me tell you a story: For 35 years, I ran a company called Acxiom Corporation. In the early ‘70s we started, with just 25 employees, as a “service bureau,” which meant we rented out space on our computers to other companies. But as computers became more prevalent, and therefore less expensive, we could see that we were rushing headlong toward a dead end. So we pivoted to direct marketing, and eventually to data mining and database marketing. One by one, we landed the big banks – Citi, Chase, Amex, JPMorgan, you name them, we had them. Between 1982 and 1991, our annual revenue increased from $7 million to some $90 million, the vast majority of it from the banks, who increasingly depended on us to give them accurate information on potential credit card customers. We went public in 1983, adding stockholders to the people we had to please. Growing like a weed, we were adding layers of managers and VPs and directors faster than we could print their business cards. By the middle of the 1980s, I could walk down our main hall and see people I didn’t even know.

To my mind, one of the greatest requirements of a successful CEO is to be able to keep one eye on the far horizon. In the midst of the maelstrom I was looking ahead, and the problem I foresaw was that we couldn’t continue processing greater and greater amounts of data in the same old way without becoming less and less accurate. If we kept doing what we were doing, eventually we would be of no use to the banks, and that would be that. “But,” I said to one of my partners, “what if we could give everybody in the U.S. – and every single address – a number?” Such a thing had never been done. But I knew that if we could come up with a series of constant numbers, we could eliminate much of the time, computer power, and uncertainty then inherent in data processing.

The more I thought about it, the more I realized it wasn’t even a choice –it was either disrupt every single process that we had worked for two decades to establish, or face the fact that we were on our way to becoming a dinosaur. But oh, the screams, the wails, the hand wringing! I had to finally threaten to quit the company before my people came around and faced the inevitable. And yes, it was hard. It took a couple of years to create the data mining system we called AbiliTec, and several more years to implement it throughout our business – about five years in all. But once done, it kept us relevant. When I left Acxiom in 2008, we were the global leader in data mining and its accompanying technology, with 7,000 employees worldwide and $1.5 billion in revenue.

Today I’m the CEO of a tech company called First Orion, whose product is spam and scam protection for the major telecoms. We started with three employees in 2008 and now we’re up to nearly 200. We’re in the process of building our own headquarters building in Little Rock, Arkansas.

A lot has changed in business since those pivotal days back at Acxiom. Today, innovation is the name of game – of everybody’s game – and I’ve made sure to create a corporate structure that fosters innovation: no more than three layers of reporting; nimble team-based product and process units; open encouragement for people to try things, to play around with the fireworks of creativity – even if what they come up with doesn’t immediately lead to anything.

You never know where the spark for your next billion-dollar idea will come from, so you better make it easy for the sparks to fly.

Charles D. Morgan is the visionary former Chairman and CEO of Acxiom Corporation, and is now Chairman and CEO of his latest tech venture, First Orion.  His new book is Now What?  The Biography of a (Finally) Successful Startup.  Morgan lives in Little Rock, Arkansas.  For more information, please visit https://firstorion.com.