Blog
You are here: Home1 / Blog2 / Books3 / Mentoring in Reverse 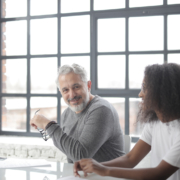 This blog is provided by Bob Fisch, founder and former rue21 CEO.  It is a companion to his interview on Innovating Leadership, Co-creating Our Future titled OK, Boomer, OK, Millennial; Time for Collaboration Instead of Combat that aired on Tuesday, November 3rd, 2020.

What’s the best way to find out what others around you might know that will help you and your business? First, ask them. Then, listen to them, no matter Millennials or Baby Boomers, or position in the company.

The smartest people often don’t speak a lot, it was pointed out to me by a global industry analyst, Steve Richter, I met at a Columbia University retail conference.

His wise observation is in the “Listening” chapter of my book, Fisch Tales: The Making of a Millennial Baby Boomer (ForbesBooks 2019).

In Fisch Tales, I advocate Mutual Mentoring to bring the generations together for the greater good. A variation of that, now catching fire in the corporate world, is Reverse Mentoring.

Just because I was in charge of 1200 stores and 20,000 employees at specialty apparel retailer rue21, I didn’t assume I had all the answers, or all the right answers. Knowing what you don’t know is a strength, not a weakness.

Ninety-percent of our people in the field were under 35, and 75% of the support center staff were 20-30 years old. I know first-hand that, given the right opportunity, Millennials can help accelerate success. Now, more than ever, they are the key to growth at both the top and bottom lines.

I didn’t assume that their age meant they had nothing to teach me. I enjoyed nothing more than walking around the office, or listening on a conference call, to find out what they thought, and learn something in the process. That was the only way our company could stay current and connect with our customer base, which was mostly the same age group.

Estee’s Esteemed CEO
Currently, the best example I’ve come across of Reverse Mentoring is what CEO Fabrizio Freda is doing at Estee Lauder. On his watch, the global beauty brand has been riding a phenomenal growth curve since he took the reins of its U.S. group a decade ago. The company’s market value today is more than $70 billion. When Mr. Freda joined the company, it was less than $7 billion. He also doubled sales volume during that period to $14 billion, double the sales when he came aboard. There’s no arguing with that kind of success.

Impressive as that is, the real story is how he did it. I suspect Mr. Freda, a Baby Boomer, would be the first to say he couldn’t have done it without the energy, enthusiasm, and brainpower of Millennials.

He explained his rationale to Harvard Business Review by saying that “the future could not be informed by the past.”

I love that attitude! I couldn’t agree more because that’s the way I always ran any company I headed. At rue21, I learned from experiences elsewhere that we’d be more successful by not following the industry’s conventional wisdom. There definitely will be those who doubt you, but I’ve found that they’ll be the ones stuck in the past as you discover new opportunities.

That’s also what Fabrizio Freda is doing with his Reverse Mentoring program at Este Lauder. It has proved to be so effective, it now numbers almost 500 reverse mentors working with 300 senior executives in more than 20 countries, according to WWD Beauty.

Teaching Up the Organization

Who knows better than Millennials how to manipulate social media for maximum impact in the marketplace? So, he has Millennials teaching senior executives at Estee Lauder all about how social media influencers work.

By deploying Millennials in the company on such a large scale today, Mr. Freda is future-proofing Estee Lauder’s business for its leadership tomorrow.

The bonus benefit is that the reverse mentoring Millennials feel more valued and respected. That stimulates them to up their game and their contributions. With this innovative dynamic that Fabrizio Freda has put in place, upper management stays abreast of cutting-edge thinking among the company’s younger ranks, and the Millennial employees groom themselves for bigger responsibilities as they ascend the corporate ladder. It’s a classic win-win for all concerned (another kind of Reverse Mentoring that any business leader already should be practicing is listening to their customers, who may be the best mentors of all).

We once were taught growing up to “respect your elders.” Nothing wrong with that. It’s sound advice, but it doesn’t stop there.

You see, Reverse Mentoring works only if the elders take it to heart, put their ego aside, and stay open to learning new things, by respecting their juniors.

Bob Fisch is the author of Fisch Tales: The Making of a Millennial Baby Boomer and is recognized as a pioneering merchant for his bold and successful innovations in value-priced, fast-fashion retailing, notably at rue21. As CEO, he took rue21 from bankruptcy to a fast-track winning streak that included a hot-stock IPO, building a national network of 1,200 stores, and a billion-dollar-plus valuation. Bob began his career at Abraham & Straus (A&S) New York and within a dozen or so years had risen to become president at Casual Corner, a division of U.S. Shoe.  The prestigious retail magazine Chain Store Age named Fisch one of “10 CEOs to Watch in 2010.” The criteria for making the very short list, wrote the magazine, was “the influence they wield in their respective categories—and because they are willing to shake things up a bit.”