Insights
You are here: Home1 / Insights2 / Board Leadership3 / More Women on Boards: An International Perspective 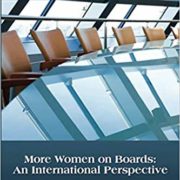 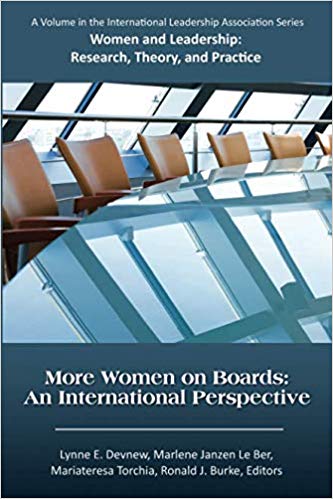 This blog is provided by Lynne E. Devnew and Marlene Janzen Le Ber as a companion to their interview for Voice America conducted live at the International Leadership Association Conference. Their interview focuses on:  More Women on Boards, An International Perspective on Taking Action; it aired March 19, 2019.

Let’s begin with an assumption that in an ideal world gender equity, racial equity, religious equity, and cultural diversity would not be issues meriting attention.  The best candidates for positions in governments, leadership in workplaces, starring roles in film, etc. would always be chosen and these best candidates would be perfectly representative of the population.  As we all know, however, we don’t live in an ideal world.  We recently edited a book titled More Women on Boards: An International Perspective. In it, 42 authors, women and men from all over our globe, shared their research and experience related to an area where the world is far from the ideal – gender equity on Boards of Directors.  In 2017, women held only 15 percent of board seats globally.[i] There are many, many reasons for this lack of equity.  In our book, and in the work of other researchers, the challenges of reaching gender equity on boards have been explored and many suggestions for how to come closer to achieving the ideal have been offered.

One major conclusion we’ve reached, and which we believe is evident in all the work that’s been done, is that there are many ways to make some progress, or to move the needle, towards gender equity on boards of directors, but the influence of any one solution will be far from enough to reach the ideal and a “one size fits all” strategy will fail. In this article, we’ve summarized the challenges to achieving gender equity on boards and suggestions to address each of the challenges into four broad categories:  boards themselves, women themselves, culture, and laws. One more challenge relates to the argument whether this idea of gender equity on Boards of Directors is even worth pursuing.

Boards and their current members provide challenges for increasing gender equity on boards.   First, in countries and companies without term limits for their Directors, the turnover is very limited and there may be very few board openings.  Demonstrating how important this challenge is, women were named to take 137 of the 358 vacant seats on Fortune 500 companies’ independent boards in 2017.  Thus, over 38 percent of the vacant seats went to women, a huge increase over the 28 percent in 2016.  But there were 4,747 seats on the boards of those companies.[ii]  So, even if all new board members were women, progress would remain very slow and totally excluding men as potential new board members would be unacceptable to most everyone.

Another barrier is the oft-stated requirement for board members to demonstrate an understanding of the “big picture”.  This competence is often viewed as best gained by serving as a company CEO.  However, as there are very few women who are hired as CEOs (e.g. 4.8% of CEOs of S&P 500 companies are women[iii]), few women have a resume indicating they have the CEO experience considered a prerequisite for board membership

Yet another challenge is that, in general, individuals are most comfortable working with others who share their values and their interests, people whom they both like and trust.  Thus boards have most often looked for new members among the people they know.  Sometimes they even seek people who look and act as they do.  They believe they are doing this in the interests of smooth board functioning.

Means for addressing these challenges include: board term limits; increasing the size of boards; recognizing that in today’s fast-changing, high technology, global economy CEOs aren’t the best source for the gaps in skillsets on boards; and adding women who are known and admired rather than merely “a woman” to meet a quota.  Executive recruiting firms are often used to help identify women not already known to board members and who would be a good board “fit”.

In addition to boards posing challenges to adding women members, boards can also limit women board members’ effective participation.  Some boards are run by chairs who listen only to a few most trusted members.  Adding women to a board if they are not going to have a voice on the board is meaningless, and board chairs are key to ensuring the voices of all board members are heard.  In addition, research has demonstrated that adding a “token” woman to a board means little except for an improved statistic.  Women’s voices seem to become an influence when there are at least three women on a single board.

Some evidence indicates that women themselves contribute to the equity issue because there are not enough women who aspire to board membership or who are prepared to serve on boards. As noted above, few women have served as CEOs and given that this is considered essential background experience, woman do not stand up to be included as independent directors.  “Golden skirts” in countries such as Norway highlight another problem.  Although women hold more than 40% of the board seats in Norway, many of the seats are held by a few women, the “golden skirts,” who are professional board members and participate on a large number of boards. The large percentage of undergraduate and professional degrees being earned by women, and the growing number of women in C-suite positions (even if not CEO) would suggest a larger number of qualified women for directorships.  Arguments are also made for the value of feminine relational leadership, which is more likely to be seen in women’s skill sets and backgrounds, as contributing knowledge, values, and decision-making approaches that would enrich boards; perhaps in ways that are more valuable than prior CEO experience. Today, many leading universities and professional women’s group offer programs to help women develop big picture and networking skills among others; efforts to help women who do not have CEO backgrounds prepare for board membership.

Some suggest that women don’t want to serve on boards; the cost-benefit analysis doesn’t come out favorably for women.  This appears to conflict with evidence that women are more prepared for board meetings than the men serving on the same boards.  However, women often have major responsibilities outside of work, and home and family roles can conflict with career ambitions.

This challenge is closely linked to cultural values, stronger in some countries and within some religious communities than in others, that women’s primary role is as a caregiver at home.  While our shrinking globe and global media have reduced this challenge to an extent, such beliefs still have a major influence.  Many would question the assumption of the ideal world we posed at the beginning of this statement. Even in Western countries where gender equity is espoused, most of the childcare, eldercare, and home care is done by women whether they work outside of the home or not. In some countries, gender equity is increasingly codified in the law; in other countries, the laws restrict women’s participation outside the home. Countries with strong cultural support for increasing the number of women on boards have used the legal system to require reporting of women’s representation on corporate boards or to enact quota systems.  In countries where the culture is consistent with quotas and where penalties for noncompliance are included in the laws, quotas have been quite effective.  Recently France joined Norway in the elite group of countries where the percentage of women on boards exceeds 40 percent.[iv]

As a final discussion point, it is worth noting that once one gets beyond the arguments that it is unfair to discriminate against women and that it is foolish to dismiss the talent of half the world’s population, the arguments for adding more women to boards become controversial also.  Women board members have been found to add new perspectives that improve decision making, encourage innovation, serve as role models for women employees, change the atmosphere at board meetings, and encourage corporate responsibility.  Yet, when researching human behavior it is almost impossible to reasonably assume that the number of women on a boards is the only variable and that “all other factors are equal”.  Perhaps that is why the results of studies measuring the benefits of adding women to boards often seem inconsistent.  Company size, board make-up, chair behavior, industry, the style and behavior of the individual women involved, and all the other topics discussed earlier might also be “not equal” leading to conflicting evidence among studies.

We believe adding women to boards is valuable and that there are many, many things boards, women, and society can do to increase the number of women on boards.  We want to make sure we’re all remembering though, that complex issues seldom have simple solutions – and board equity is a complex issue.

Lynne E. Devnew is on the associate faculty for the doctoral program, is a distinguished research fellow, and chairs the Women and Leadership Research Group at the University of Phoenix in the United States. A former senior middle manager at IBM, she has a DBA in strategy from the Questrom School, Boston University, and is a graduate of Columbia University’s Master Degree Program for Executives in New York City and Simmons University in Boston, Massachusetts, all in the United States. Dr. Devnew’s research work and publications are focused on women’s leadership aspirations and leader identity development. She serves on the boards of several not-for-profit organizations.

Marlene Janzen Le Ber is Associate Professor and Chair, School of Leadership & Social Change at Canada’s only women’s university, Brescia University College and Adjunct Research Professor at the Ian O. Ihnatowycz Institute for Leadership at Ivey School of Business, Western University. Her teaching is all leadership-related. A multiple research-grant holder in the complex processes of leadership, her current research is in leader character, leader identity development in women, and impact of art-based and narrative research on policy and social change. Prior to her doctoral studies, Marlene was a health care executive within academic health sciences centers, known as a strategic leader who spearheaded numerous health system innovations. Marlene has a PhD in Strategy from Ivey Business School, MScN (Admin) and BScN from Western University.

[i] This statistic is from Deloitte’s “Women in the boardroom: A global perspective – 5th edition” published in 2017 and based on data gathered from over 60 countries.  The relevant statistic in the 4th edition, published in 2015, was 12 percent and gathered from more than 40 countries.  The report is available at https://www2.deloitte.com/global/en/pages/risk/articles/women-in-the-boardroom5th-edition.html.

[ii] The number of women filling vacant and new board seats for Fortune 500 companies is from Heidrick & Struggles 2018 “CEO & Board Practice”.  This report is available at https://www.heidrick.com/Knowledge-Center/Publication/Board_Monitor_2018.

[iii] This information is from Catalyst Research’s “Pyramid: Women in S&P 500 Companies” on March 25, 2019.  The pyramid can be found at https://www.catalyst.org/research/women-in-sp-500-companies/.

[iv] The leading role of Norway is discussed many times in our book, More Women on Boards: An International Perspective.  After it was completed, France passed the 40 percent mark, as reported in Catalysts’ “Quick Take: Women on Corporate Boards” dated December 21, 2018.  This report can be found at: https://www.catalyst.org/research/women-on-corporate-boards/.