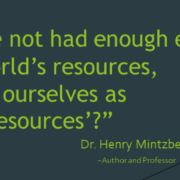 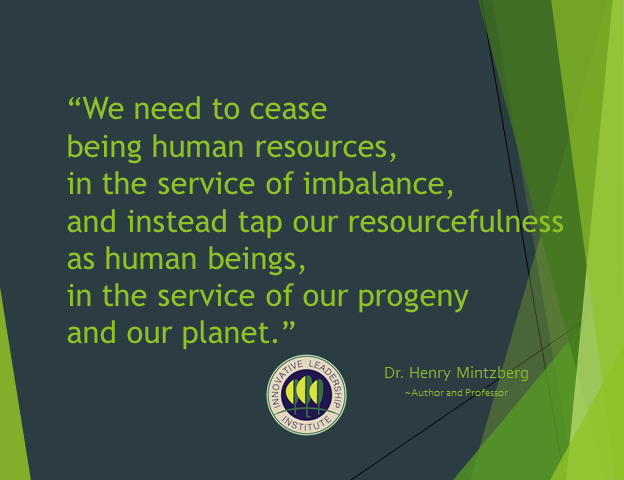 This blog is provided by Dr. Henry Mintzberg. It is The Basic Point section from Dr. Mintzberg’s book, Rebalancing Society, Radical Renewal Beyond Left, Right, and Center ©2015 and used with permission. In his book, Henry shares seven observations. If you would like to find out more about each of his points, you can purchase his book here. Dr. Mintzberg is the author 20 books, including Simply Managing and Bedtime Stories for Managers, which have earned him 20 honorary degrees. This blog is a companion to his interview on Innovating Leadership, Co-creating Our Future, Rebalancing Society: Radical Renewal, Beyond, Left, Center, Right which aired on 1/21/20.

To start or to continue receiving the weekly blogs via email, please sign-up using this link: subscribe to Innovative Leadership Institute weekly blog.

Enough of the imbalance that is destroying our democracies, our planet, and ourselves. Enough of the pendulum politics of left and right, as well as the paralysis in the political center. Enough of the visible claw of lobbying in place of the invisible hand of competing. Enough of the economic globalization that undermines sovereign states and local communities. Have we not had enough exploiting of the world’s resources, including ourselves as “human resources”? Many more people are concerned about these problems than have taken to the streets. The will of people is there; an appreciation of what is happening, and how to deal with it, is not. We are inundated with conflicting explanations and contradictory solutions. The world we live in needs a form of radical renewal unprecedented in the human experience. This book presents an integrative framework to suggest a comprehensive way forward.

The Triumph of Imbalance

When the communist regimes of Eastern Europe began to collapse in 1989, pundits in the West had a ready explanation: capitalism had triumphed. They were dead wrong, and the consequences are now proving fateful.

It was balance that triumphed in 1989. While those communist regimes were severely out of balance, with so much power concentrated in their public sectors, the successful countries of the West maintained sufficient balance across their public, private, and what can be called plural sectors. But a failure to understand this point has been throwing many countries out of balance ever since, in favor of their private sectors.

Welcome to the Plural Sector

There are three consequential sectors in society, not two. The one least understood is known by a variety of inadequate labels, including the “not-for-profit sector,” the “third sector,” and “civil society.” Calling it “plural” can help it take its place alongside the ones called public and private, while indicating that it is made up of a wide variety of human associations. Consider all those associations that are neither public nor private—owned neither by the state nor by private investors—such as foundations, places of worship, unions, cooperatives, Greenpeace, the Red Cross, and many renowned universities and hospitals. Some are owned by their members; most are owned by no one. Included here, too, are social movements that arise to protest what some people find unacceptable (as we have seen recently in the Middle East) and social initiatives, usually started by small community groups, to bring about some change they feel is necessary (for example, in renewable energy). Despite the prominence of all this activity, the plural sector remains surprisingly obscure, having been ignored for so long in the great debates over left versus right. This sector cannot be found between the other two, as if on some straight line. It is a different place, as different from the private and public sectors as these two are from each other. So picture instead a balanced society as sitting on a stool with three sturdy legs: a public sector of respected governments, to provide many of our protections (such as policing and regulating); a private sector of responsible businesses, to supply many of our goods and services; and a plural sector of robust communities, wherein we find many of our social affiliations.

How do we regain balance in our societies? Some people believe that the answer lies in the private sector—specifically, with greater corporate social responsibility. We certainly need more of this, but anyone who believes that corporate social responsibility will compensate for corporate social irresponsibility is living in a win-win wonderland. Other people expect democratic governments to act vigorously. This they must do, but they will not so long as public states continue to be dominated by private entitlements, domestic and global. This leaves but one sector, the plural, which is not made up of “them” but of you, and me, and we, acting together. We shall have to engage in many more social movements and social initiatives, to challenge destructive practices and replace them with constructive ones. We need to cease being human resources, in the service of imbalance, and instead tap our resourcefulness as human beings, in the service of our progeny and our planet.

Henry Mintzberg is a writer and educator, mostly about managing originations, developing managers, and rebalancing societies, which is his current focus. Henry sits in the Cleghorn Chair of Management Studies at the Desautels Faculty of Management, McGill University in Montreal.

He has authored 20 books, including Simply Managing and Bedtime Stories for Managers, which have earned him 20 honorary degrees. Henry co-founded the International Masters Program for Managers as well as a venture CoachingOurselves.com, novel initiatives for managers to learn together from their own experience, the last in their own workplace.

Henry may spend his professional life dealing with organizations, but he spends his private life escaping from them—mostly in a canoe, up mountains, and on a bicycle. You can find out more about his adventures on mintzberg.org, which includes his blog.