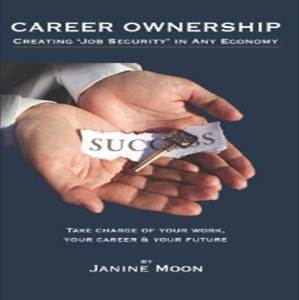 An important element of being an innovative leader is the ability to look out on the horizon, spot trends and integrate those trends into his/her personal understanding of the world, behavior, the culture of the company and the company systems and processes.

I have been working on an IT Attract and Retain Talent study for TechColumbus in Central Ohio.  While unemployment is still relative high in our region, there are many jobs open in IT and the rate is growing.  During this study, one trend that emerged as interesting to me is the change in what work looks like for many people.  While we have read about the trend of more people being self-employed or freelancers, this recent recession is making this trend an increasing reality very quickly.

According to the Christian Science Monitor, June 13, 2011:  “Freelance jobs: Half of all new jobs in recovery?  Freelance jobs are up 52 percent at Elance. The number of entrepreneurs are at a 15-year high. But the growth in freelance jobs means less security for the workforce.

As America’s jobs recovery begins to take hold, one sector is growing faster than ever: freelancing.  There’s reason to celebrate. Many Americans are bypassing the corporate ladder to strike out on their own – doing everything from graphic design to iPhone programming. But there’s also reason to worry. Others are becoming entrepreneurs by necessity, forced to take freelance jobs because they cannot find regular jobs.  Desperation, rather than inspiration, seems to be the major force behind the trend. And the surge isn’t over.”

What is a response of an innovative leader to this trend?  I suggest the first response is to think about what it means in four different basic dimensions that impact our personal and professional success:

To address #1 and 2 above, I want to reference a wonderful book by Janine Moon, a friend and the author of: Career Ownership – Creating Job Security in Any Economy.  She provides a discreet set of tools available that will help you:

What are you doing to look across the horizon at the trends and create your own personal security?

Michael P. Glimcher,Chairman of the Board of Glimcher Realty Trust spoke at the TechColumbus 2011 Leadership Series meeting sponsored by Vorys.  Michael has been a trustee of the Company since June 1997, was appointed President of the Company in December 1999, and appointed Chief Executive Officer in January 2005.

Glimcher Realty Trust is a retail real estate investment trust (REIT) and a recognized leader in the ownership, management, acquisition and development of malls, including enclosed regional malls and open-air lifestyle centers, as well as community centers.  Glimcher Realty Trust, as the company has been known since 1994, is a public company and controls from its Downtown headquarters a portfolio of 26 shopping centers across the U.S.

“I drove out here from Boston to visit a relative,” recalls Herbert Glimcher, who founded The Glimcher Company, the REIT’s predecessor, in 1959. “I had $50 in my pocket.”  The company began building fast food stores including McDonald’s and strip centers.  In the 1980s the company developed its first enclosed malls, including Indian Mound Mall and River Valley Mall, and has since built Polaris Fashion Place and acquired Eastland Mall. Since the company went public in 1994, Glimcher shifted from a focus of being a development company to being an operating company.  With this shift, it was important to change the company function, its leadership team and its culture.

Fresh on the heels of the Great Recession, senior leaders are changing their perspective. They have managed their companies through a period of sustained and painful adversity. They have a heightened awareness of what makes sense — and what doesn’t — for their businesses.   They are keenly aware that success in the new era will require new skills and capabilities.

Michael talked about the tough economy and the tough lessons that allowed Glimcher to endure the economic crisis and position them for success going forward.  He shared some of his lessons learned over the past 15 years. 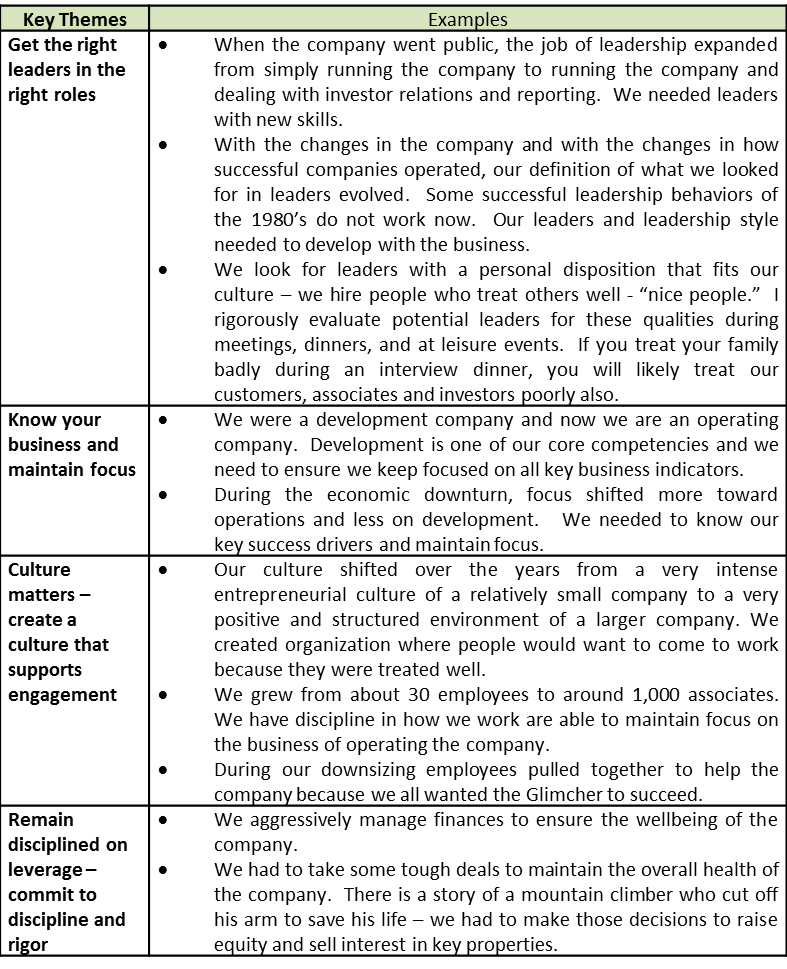 Given the latest research by Gallup on employee engagement and the importance of working for a supervisor who cares, Michael’s emphasis on creating a nice culture is a differentiator for Glimcher.  What Michael calls “nice” is described by Gallup in the following questions (this list includes 4 of their 12 key questions to evaluate engagement):

In a world where we face a great deal of uncertainty in all areas of our lives, Glimcher promotes a culture of respect resulting in greater employee engagement, greater productivity and greater customer satisfaction.  All of these contribute to company sustainability and success.

As with other successful leaders, Michael has focused his attention on knowing his business, hiring the right leader and creating a culture and systems that promote effective operations.  Additionally, he built a company that supports the wellbeing of his associates and the community.

What is next?  Michael is looking at “infill sites” and acquisitions as key drivers for the next 3-5 years.

For more information on Glimcher, http://www.glimcher.com.

I just met with Doug Morgan, a prominent attorney with Hahn Loeser and avid cyclist in Columbus, Ohio.  He is leading an initiative, 2 By 2010, to promote employees cycling to work 2 days/month or 10% of their time.  Doug is a board member of  Consider Biking, a non-profit committed to making Central Ohio increasingly safe, accessible, and friendly to bicycle transportation.  Thier target is to have 100 company CEOs sign the pledge to support this initiative in their company and deliver these results in 2012. I pulled research from the recent Gallup work connecting employee wellbeing to company success.  Here are some of the wellness benefits of this initiative for our local businesses:

These five domains provide a way to look at overall wellbeing for an organization through a different lens.  Making a single change like promoting biking to work can make an impact for many employees in overall wellbeing and thus improve the organization’s overall health.  Gallup studies include the impact of wellbeing on several key business success indicators including:  turnover, safety, direct measures of productivity, customer engagement and profit.

My company is signing the commitment to bike to work 2 days per month.  You can do the same and get the added benefit of improved wellbeing.

Nando Parrado spoke at the World Business Forum 2010 about Effective leadership amidst chaos: The Miracle of the Andes. Fernando Parrado is one of the survivors of the airplane crash of Uruguayan Air Force Flight 571 in the Andes in 1972 – one of the greatest survival stories ever. After the accident, he helped publish the bestselling book Alive: The Story of the Andes Survivors. In 2006, he co-wrote the New York Times bestseller Miracle in the Andes: 72 Days on the Mountain and My Long Trek Home.

Please watch the short video to hear a brief summary by the speaker in his own words. His message was one of humility and perspective.

1.  Luck plays a role in our success.  I survived because I chose a seat in the plane in row 9.  Everyone behind this row was killed.

2.  No one knows how you will react in crisis until it happens.  We did things we could never have imagined to survive.  You cannot think like you are sitting here, you must put yourself in that spot with no food for days and slowly freezing. The search for us had been called off and we had no idea when or if we would be found.

3.  We learned what is important in life.  You never know what will happen so do the things that are important every day.  What is most important is the love you have in your life.  Life is measured by the extraordinary moments that take your life away and it is all rooted in love. Kiss your partner.  Maintain your connections with those you care about.  Make each moment count.  Be grateful.

It has been to spend almost 2 days listening to great business and political leaders talking about what they did to create professional success.  Now, near the end of the 2 days, we hear from an amazing individual who talked about what it is to be a person living in the moment rooted in what is really important to him, love.  His message calls me to stop and think about who I am beyond my contribution to my profession.  If I were to die, then be given a second chance at life, what would I do with that precious time?  Can I live my life that way now?

A.G. Lafley is the former Chairman of the Board, President and Chief Executive Officer of Procter & Gamble, the world’s largest consumer goods company.  He spoke at the World Business Forum about customer centric growth.

In response to the question, what would you recommend we do tomorrow when we go back to work, Mr. Lafley talked about the following components necessary as the foundation for a creative culture.  He recommended looking at how you are doing in each of the following areas:

1.  Openness.  Be open to new ideas and disruptive technologies.  There are innovations that will change many facets of our lives very quickly.  If we are not identifying them and bringing them to market, others will.  These changes may come from within our industry or others that impact us indirectly.  If the washing machine changes, detergent may change dramatically.  Is there something you should be more open to?

3.  Connecting.  With the advent of technology, we are able to connect with colleagues and customers in ways not possible a few years ago.  Who do you want to connect to (a thought leader or mentor)?  Who would you like to connect to you (customers, employees)?  Do you want to be more accessible?

4.  Collaborating.  With companies subcontracting, outsourcing, and collaborating in ways never imagined a few years ago, what are you doing that you should shift to someone else?  When you shift the work, what have you made time to do more of?

5.  Courage.  Have the courage to make the tough decisions like introducing a disruptive technology or making a business decision that will create long term value for the company but frustrate some customers (like discontinuing a mediocre product line).  What one action can you take that you have put off because it just seems too daunting?  Is there a small experiment you can engage in that will seem less daunting?

Where are you demonstrating these qualities in your work?

Carlos Brito talked to the World Business Forum about – Building a Performance Culture.   Better than you: How to Building a Cohesive Team of High Achievers.  Carlos is the CEO of Anheuser-Busch InBev. During 5 mergers and acquisitions we continually asked: why is it that our performance is better than these other companies.  We found the “Dream People culture”.  This is not about theory – it is about practicing what we believe in.

1.  Dream – have a big dream, stretch and be credible.  Define big by we know 70-80% of how to get there.   Inspire, align and drive commitment.  Set the bar higher.  Anchor everything in the dream.

3.  Culture of Ownership – owners make better decisions because it is their company and they are committed for the long term.   Need to worry about both short term and long term.  Long term thinkers do not take short cuts – it takes time and patience to succeed.

As the CEO, I talk about every time I meet with people.  This is what we are all about.  It is what brought us here to be at the top of our industry.  It is my job to make sure everyone knows this.

Brito’s discussion is consistent with those of Collins and Welsh.  While he talks about his experience through his own lens there are several commonalities:

As I listen to these speakers talk about their research and their experiences, I hear similar themes.  As our world changes, leadership is critical to business success and while we may use different words and models, there are very strong common themes coming from research and from experience.  What are you doing as a leader to evaluate personal and organizational leadership to ensure your success?