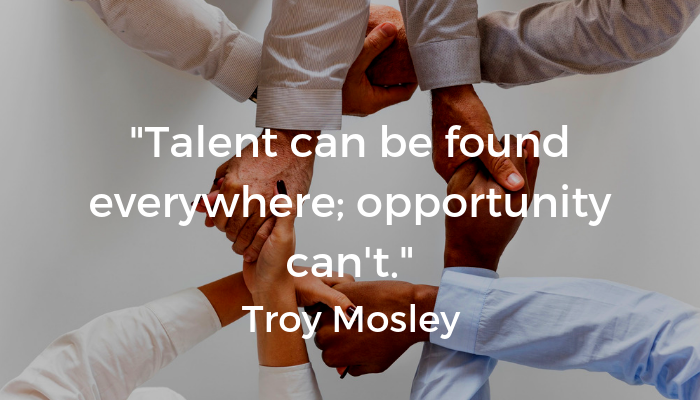 This is a guest post by Troy Mosley. It is the companion to the Voice America interview on Increasing Inclusion to Drive Results and Build a Better World aired October 19, 2018 with Troy.

The Information Age has made the world smaller. Technology gives consumers greater access to worldwide markets in seconds. The near real-time accessibility of information brings people closer, sharing and reacting to the same data across oceans. This “smaller world” makes many feel like global citizens and increases market competition. Consumers are now more selective about purchases and  often choose brands that reflect their values over those with the lowest price point.

Businesses that understand this shrinking effect are postured to dominate global markets for the foreseeable future. A key component to selling in dynamic global markets is having a diverse workforce that can connect with this broad customer base. As a twenty-year combat veteran and health administrator I have studied inclusion, diversity, strategic planning and leadership principals, and developed an appreciation for what drives consumer behavior. In military planning circles it is said that “the best way to stop a tank is with another tank.” Similarly, the best way to sell products and services to women and minority groups is to have women and minorities in your R&D, IT, Marketing, and Operations departments. This isn’t just diversity for the sake of diversity, but a varied team of professionals in key positions with the requisite education and training to help develop and implement your company’s strategy.

Nike is a prime example of how to leverage diversity to connect with consumers. In September 2018, Nike launched an ad campaign with former NFL quarterback Colin Kaepernick as the face of the campaign and the motto “Believe in something even if it means sacrificing everything.” Kaepernick became a household name by refusing to stand for the national anthem before games to protest police brutality and racism. President Trump suggested that those kneeling for the national anthem were “Sons of Bitches” who should be fired. The day after Nike released their ad campaign some costumers videoed themselves burning Nike products. Nike’s stock fell 3% but rebounded to 4.2% by week’s end. Nike’s online sales jumped 25% the following week and their stock is now trading at an all-time high. They had the guts to take a huge risk because Nike’s staff is among the most diverse in the industry. They were able to understand and connect with their consumer base in a way that positively impacted their bottom line.

Women influence 70-80% of consumer spending and make up 51% of the work force, yet comprise only 5.5% of Fortune 500 CEOs. This gender imbalance exists in virtually every industry from fashion to finance. The numbers for ethnic minorities are similarly striking. Blacks constitute roughly 13% of the US population, and spend an estimated $1.3 trillion on consumer goods annually, but make up only 2% of fortune 500 CEOs. This lack of representation directly correlates to missed opportunities for increasing market share in a rapidly changing consumer base. So what can an organization do increase its diversity?  Ah, I’m glad you asked.

Steps to Increasing Diversity in Your Organization

The military can offer many lessons on inclusion. The armed forces ended the practice of segregation in its ranks in 1948, six years before the Supreme Court ruled on Brown v. Board of Education. Women achieved pay equity in 1943 and were admitted to previously all-male uniformed service academies in 1976 when women still needed male co-signers to obtain credit cards. Today, women comprise 5.5% of flag officers (CEO equivalents) and 17% of the total force. Black generals come from a long tradition of women and minorities advancing to the top ranks since the early 1970s. These achievements didn’t happen overnight. They were made possible by a serious commitment to building leadership that reflects those they serve.

Technology will continue to have a shrinking effect on global markets for the foreseeable future.  A diverse workforce, who are trained, strategically placed within one’s organization, and part of an inclusive corporate culture will become an increasing part of an organizations’ agility, and strategic positioning within markets.  Diversity is not only ethically prudent for businesses, it is a sound practice that yields positive returns.

Troy Mosley is a healthcare administrator by training. He spent the first twenty years of his professional life serving as a commissioned officer in the U.S. Army. He was raised in Jacksonville Beach, FL raised in the 70s and 80s in an upper middle class, predominately white community. He has always enjoyed writing, history, and is obsessed with the ideals of American Democracy, fair play, and inclusion.
He recently published Unwritten Truce: The Armed Forces and American Social Justice.