Blog
You are here: Home1 / Blog2 / Authentic Leadership3 / The Difference Between Entitlement and Awareness 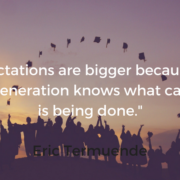 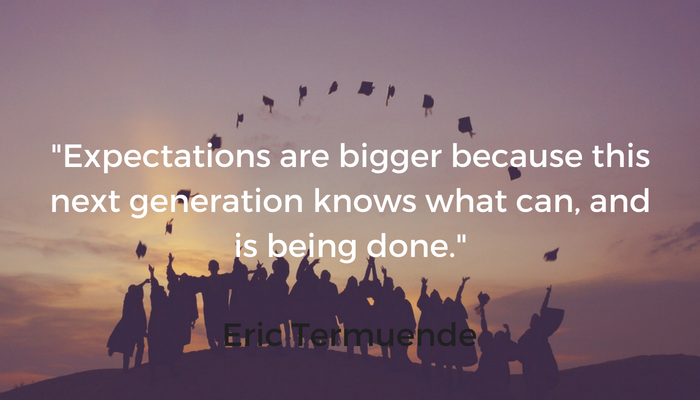 This post is written by guest Eric Termuende as a companion to his interview, Changing the Way We Think About Work on the Voice America Radio Show, “Innovative Leaders Driving Thriving Organizations” on July 3, 2018.

We’ve all heard the stereotypes around the Millennial generation. They’re narcissistic, job-hop, aren’t loyal, and most of all, entitled. They think they deserve more than they work for, and have unrealistic expectations. Right? Isn’t that what we’re lead to believe when we talk about a generation that populates such a large portion of the workplace? It seems like it, but doesn’t necessarily have to.

The Millennial demographic, as big as it is, is brought up in a technological world that didn’t exist for the generation the preceded it. This generation has better access to internet, cell phones, social media, and information that simply wasn’t nearly as accessible as it was 15-20 years ago. Job postings aren’t posted on a cork board and the resumé is only a small portion of what educating a potential employer looks like.

This means that the expectations are bigger because this next generation knows what can, and is being done.

Let’s take fairly recent news that came out of Sweden, for example. In Sweden, there is talk about moving to a 6 hour work day. Now, as someone in Canada who may not like their job, there are two options. The first is to apply for a job in Sweden with the hopes that the application will be accepted and I can work only six hours a day. The second is that I could ask my employer or government why it is that Sweden is the only country that is doing this, and why we can’t look at a similar practice here in our hometown.

Another example would be around office aesthetics. One office may have a beautiful open concept style and another may be stuck in the ‘70’s with cubicles that limit communication and interaction between employees. Because of the hyper-connected world we live in, information about these great places to work is spreading faster than it ever has before. As a result, people are asking ‘why not me too?’.

No, things haven’t changed around what people need to do to progress another step in the organization, or to work in a more efficient manner by changing the structure and aesthetics of the office, but the way we talk about it might. People need to know that the grass will always be greener, the story is always bigger than the one that is being told, and that there are always exceptions. It is too easy for a story to be posted and go viral, only to be the flavor of the hour and forgotten about shortly after, while still having impact on the people in the office and what they are aware could be taking place.

The world of work is ever changing and the ways we work and the environments we work in are changing just as quickly. Telling stories of the newest office space are nice, but rarely do they paint a full picture of what the office culture is, or what it is like to work there. The next generation is right to ask about the opportunity to advance the workplace they are in, but shouldn’t have expectations to do so. There needs to be open communication within the office from the top-down and from the bottom-up to ensure that the environment created is one the provides the tools necessary and the environment that allows people to naturally do the best work they possible can. This awareness and hyper connectivity, paired with curiosity and desire to change, adapt, and grow, shouldn’t be confused with entitlement, which is a completely different topic.

Eric Termuende is on a mission to change the way we talk about work and get fulfillment from it. A bestselling author, speaker, and entrepreneur, Eric is co-founder of NoW Innovations, and Lead Content Strategist for True Calling Canada., Eric has been featured in Forbes, Inc., Thrive Global, the Huffington Post and many others. In 2015, Eric was recognized as a Top 100 Emerging Innovators under 35 globally by American Express. Eric sat as Community Integration Chair for Global Shapers Calgary, a community that functions under the World Economic Forum. He is a former Canadian G20 YEA Delegate, representing Canada in Sydney in 2014. Eric is currently signed by the National Speakers Bureau and travels the world talking about the future of work and multiple generations in the workplace. In 2016, Eric spoke at TEDxBCIT in Vancouver giving his presentation entitled ‘Bigger than Work.’ Eric has worked and spoken with clients across the world. His new book, Rethink Work is now available on Amazon.