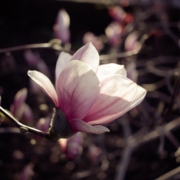 In order to meet the challenges of our time, we need to shift our thinking as individuals and as a society. The profound changes that are necessary today require a shift in our paradigm of thought and a shift in consciousness from an ego-system to an eco-system awareness. The deeper we move into the complex, volatile, and disruptive challenges of the twenty-first century, the more this hidden dimension of leadership moves to center stage. The blind spot in the 20th century toolkit of economics and management can be summarized in a single word: consciousness.

Consciousness is a thread that connects the 3 Divides (attribution to Otto Scharmer); a shift in consciousness will illuminate the interconnections among the Spiritual, Social, and Ecological Divides thus creating the conditions for current realities to transform into our desired common futures.

We are called to live with courage and collective integrity, for our survival and ability to thrive.

Consciousness is our fluid basis for how to proceed with kindness, listening, learning, self-reflection, connection to self, and awareness of other. We have a human crisis resulting from people thinking of self in an egoistic way rather than as a higher Self who sees the bigger picture of us as community. Our aspiration is to support the inherent value of each person and create a flourishing world for all of us. We are warriors of love, calling all like-minded people to join us in changing the paradigm from “me, we, they” to a global and universal “us”.

The Spiritual divide manifests in rapidly growing figures on burnout and depression, which represent the growing gap between our actions and who we really are:

Empathy is when we can enter into another’s reality without judgement to radically listen, radically see, and radically imagine. This is how we earn the right to be heard. By being witness bearers and showing empathy towards our sisters and brothers we deepen our connectedness. People everywhere will collaborate to create a future where we can heal the social divide(s) and create a world where all people have enough. Our deep connectedness and shared consciousness will guide us to create physical, social, and economic well-being where all can flourish. This can only happen if we are in tune with nature, understanding of our inescapable interconnectedness, and design our ways of living to be in balance. Our deep connectedness and shared consciousness will guide us to find the way back to each other.

The ecological divide describes the fact that humans have organized our economic and social systems largely without regard to ecological limits on a global scale. We are supporting our needs (and in many cases our wants) through degradation of the very systems we need to sustain our species and other species on earth over the long-term.

Through innovations in technology and medicine over the past several centuries, (wo)mankind has successfully extended our natural lifespan and enhanced our quality of life (in developed countries), at the expense of the natural world. We have found ourselves in a ‘negative reinforcing cycle’ and are out of balance with the natural world.

The ecological divide relates to the socio-economic divide because the organization of our social and economic systems has a great deal to do with our transgressing the boundaries of earth’s systems; we will have to consciously re-organize these systems if all humans are to have a good life on a sustainable planet. This also requires us to pay attention to equity, inter-generational and international harm, climate justice, and public participation–all socio-economic divide issues.

Ultimately, we need to bring humans back into a consciousness of earth’s limits and how we can have a good quality of life while respecting these limits. We, as individuals and society at large, need to regain congruence between our beliefs and values and how we live and work. This requires both science–to tell us where the limits are and to understand how ecological systems function–and spirit–to value the well-being of humanity and the planet more than our own excessive material consumption. This is where the ecological divide links to the spiritual divide; consciousness, care, and simplicity–all spiritual virtues–will have to be a part of bridging this divide.

There are many examples:

Check out the companion interview and past episodes of Innovating Leadership, Co-creating Our Future, via iTunes, TuneIn, Stitcher, Spotify, Amazon Music and iHeartRADIO. Stay up-to-date on new shows airing by following the Innovative Leadership Institute LinkedIn.

The founders of the Magnolia Moonshot 2030 Project collectively wrote this article, which was provided by Darcy Winslow. Darcy is one of the founders of the Magnolia Moonshot 2030 Project and the President and co-founder of the Academy for Systems Change. The Academy advances the field of awareness-based systemic change to achieve economic, social, and ecological wellbeing. Darcy worked at Nike, Inc. for 21 years and held several senior management positions, most notably starting the Sustainable Business Strategies in 1999 and as Senior Advisor to the Nike Foundation. She serves on the board of The Carbon Underground and The Cloud Institute for Sustainability Education.