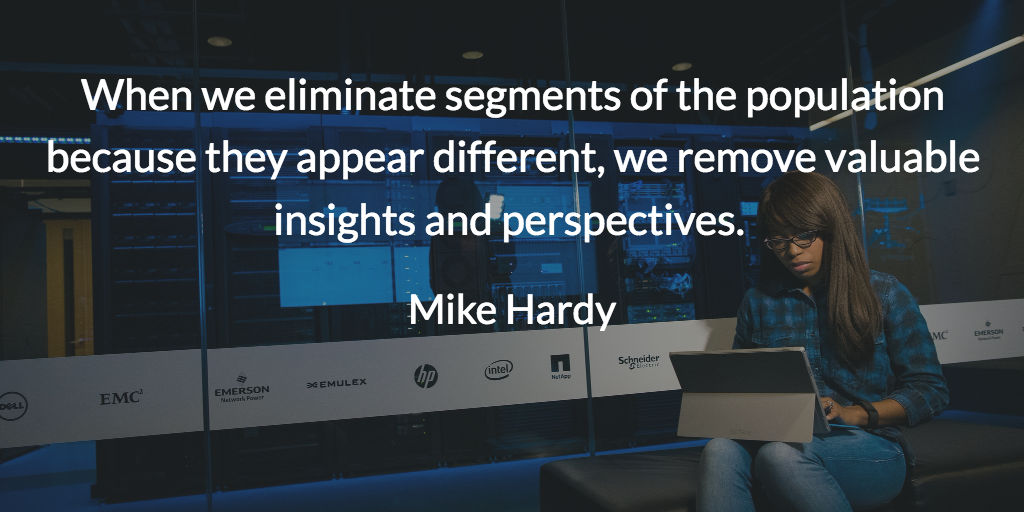 This blog is a companion to an interview with Professor Mike Hardy on VoiceAmerica “Innovative Leaders Driving Thriving Organizations” on December 27, 2016 focusing on the importance of understanding how we address vulnerability and build trust when interacting with people who appear different.

Mike was an academic economist before changing course and working for the foreign service in the UK. He was interested in the Islamic world and the global issues facing us in that part of the world and our part of the world. He is now the Director of the Centre for Trust, Peace and Social Relations at Coventry University. It is the largest peace studies center in Europe with a focus on mobilizing scholarship and academic work to help policy makers understand the issues of vulnerability and the importance of trust in creating peace.

We began by discussing how the study of peace is a leadership issue. Leadership changes the world, and presently we are in a mess in part because the quality of our leaders is, in many cases, lacking. By helping leaders understand their own views and behaviors when facing diversity, we enhance our leadership capacity. When we eliminate segments of the population because they appear different, we remove valuable insights and perspectives.

The ILA is interested in mobilizing leaders at all levels, and it empowers everyone to be leaders who address the compelling challenges we face in our families, communities and organizations. Mike is a true leader and role model in his field demonstrating leadership evolution and impact through his action. All of us, whether you consider yourself to be a leader, need to take stock of how we follow as well as how we lead.

The twenty-first century is a relationship age and the inner-connectedness of everything. We discussed the forces of prejudice versus the forces of pluralism—Mike wants to promote living peacefully in complex diverse communities. If people are not comfortable living and working among diverse people, then leaders need to spend their time policing and setting rules and guidelines to keep us safe. The alternative is a scenario in which the group creates norms and finds ways to move through situations based on its agreements without the boss intervening. If we learn to be comfortable in the space difference creates, we discover opportunity for everyone and diversity becomes a true differentiator in solving the greatest problems. When we limit diversity, we limit perspectives and are at a disadvantage.

Now let’s shift from diversity to the crisis of migration and again how we manage the flood of people into Europe and the US who look and act differently than the prevailing culture. Millions of people are fleeing the conflict in Syria and other parts of the world in which appalling atrocities are taking place. The consequences of this flood of people who are different and without resources create a dilemma. How do countries deal with this when there is such a strong reaction of prejudice and fear? So, the real crisis is: How do countries and communities cope, finding a path forward to accommodate people yet maintaining social norms and function, when flooded with people who are different in significant ways? Are the refugees coming as migrants who are choosing to stay, or staying because they can’t go home? How do we as citizens and compassionate people deal with the drivers of the movement rather than the movement itself? The real driver of the threat is not the refugees, but the plight of refugees. How do we as a global community deal with this underlying problem?

Mike is researching identity. People present themselves in the way they want to be seen. His campaign asks: Can people move from a focus on who I am to how I behave? The literature suggests that identity creates problems for us. We see immigrants as different from those living in the communities they are joining. If we need to belong and if we need also to be different, how do we integrate these two drivers into peaceful relationships?

If my identity conflicts with your identity, does this mean we will be at odds because our groups are at odds? As humans, we see ourselves as a group of identities (soccer fans, Gen X, work focus, partner/family, nationality), how do we hold that complex set of identities? Our identities are like the many ingredients in a good stew; really tasty stew is comprised of many ingredients, including spices cooked over an extended time. In some cases, however, we behave as if people with different identities (or a few different ingredients in the stew) are wrong or distasteful. Because we focus on identity, we are conditioned to look at the barriers and differences rather than commonalities. This programming can create a significant challenge in how we interact with people who appear different. How can we shift from this focus on identity to a focus on behavior irrespective of identity?

Mike has built a university center to focus on how we deal with identity and cultural difference. He believes that after issues of poverty and climate change, this is the biggest issue facing us as global citizens. Learning to deal with differences may be the single biggest driver to reduce global and local conflict. Over the course of history, conflict was often about resources. Now we are finding that conflict is about changing people to be like us. If, in a global world, we are to live with increased levels of peace and prosperity, we need to change our mindset and behaviors.

What can we do in behavioral terms to change our current trajectory?

Professor Hardy was appointed as Executive Director of the Centre for Trust Peace and Social Relations in 2014. From 1995, Mike was a senior leader with the British Council responsible for the Council’s global programme for Intercultural Dialogue, youth engagement, and global strategic partnerships.

Mike is an applied economist by training and was Head of Economics and Public Policy at Leeds Metropolitan University before moving to a Chair in International Business at the University of Central Lancashire. His policy and research work in economics focused on local jobs plans and skills for development in local labour markets. In 1995, following work with the UK Government, British Council, and European Commission, Mike moved full time to British Council to develop international work in intercultural relations.

Following overseas postings in the Arab world and Asia, he was appointed to frame and lead British Council’s global programme in intercultural dialogue.

GET STARTED
Women in Leadership: Why it Matters and How to Develop It