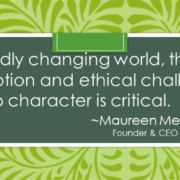 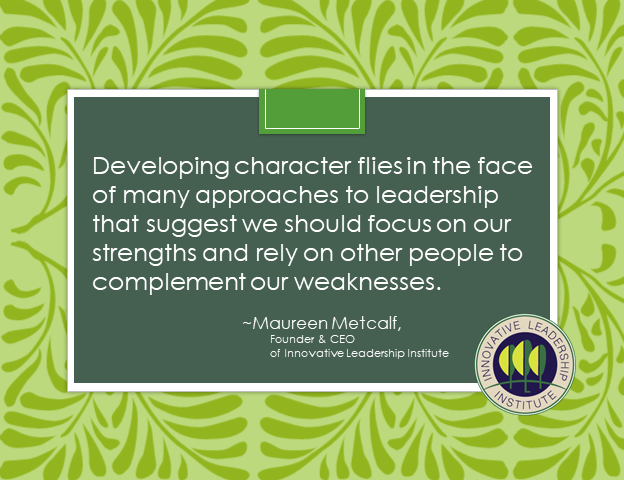 To start or to continue receiving the weekly blogs via email, please sign-up using this link: subscribe to Innovative Leadership Institute weekly blog.

This blog was written by Maureen Metcalf, based on the article, Developing Leadership Character by Mary Crossan, Gerard Seijts, Jeffrey Gandz, published in the Ivey Business Journal Issues: January / February 2012. It is a companion to the International Leadership Association Interview Series on Innovating Leadership, Co-creating Our Future that aired on Tuesday, February 4, 2020, titled Leader Character.

“Character fundamentally shapes how we engage the world around us, what we notice, what we reinforce, who we engage in conversation, what we value, what we choose to act on, how we decide…and the list goes on.” While there is no generally accepted definition of character, Mary Crossan and her co-authors focus on personality traits, values, and virtues as the focus of virtue-based character in their article, Developing Leader Character. They also highlight the importance of Judgment which is at the centre of their leader character framework shown in Figure 1.” 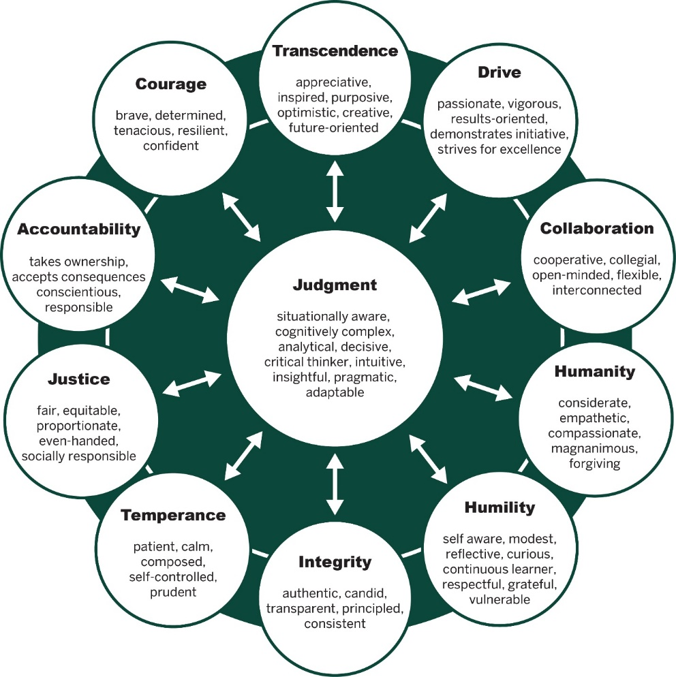 All of the behaviors associated with character are virtuous, meaning that they have been vetted by research as being desirable by cultures throughout history. And because only a few of the behaviors are trait based, character can be developed. Some of the behaviors can be viewed as values, but it is important to recognize that they are not just any values, but only ones that satisfy the criteria of being virtuous. The Developing Leadership Character article provides an in-depth analysis of eleven leadership virtues and what happens when they are either lacking or over weighted. Aristotle noted any virtue will operate like a vice when not supported by the other virtues. Thus, Courage becomes recklessness when not supported by Temperance. Integrity that is not supported by Humanity and Humility runs the risk of a person being dogmatic and egotistic. The aim is for individuals to develop strength in all dimensions of character. The following example from their article describes how a virtue can strengthen an individual’s performance and, when not supported by other dimensions of character, becomes a vice.

How do we develop character?

Because character is habit, the question to ask is “who am I becoming while I am busy doing?” advises Crossan. We are always becoming something – more courageous, or less courageous, more humble or less humble. Developing character requires understanding what it is, and in particular, how virtues could operate like a vice. Many people are proud of their candor, their modesty, their calm, etc. but if these behaviors and the dimensions of character they support are not part of a strong network of behaviors, there is every possibility that they are counterproductive – operating like a vice. Consider, something like “grit,” which has been widely touted as important. There are many behaviors within Courage and Drive that are grit-like, but research around grit has shown that it can lead to burnout. Why? Because you need the other dimensions of character, and in particular Judgment, to know when to exercise grit and when not to.

Developing character flies in the face of many approaches to leadership that suggest we should focus on our strengths and rely on other people to complement our weaknesses. Complementarity makes sense for personality traits like introversion or extroversion, but when it comes to character, weaknesses compromise individual judgment.

From another article co-authored by Mary Crossan, Elevating Leader Character Alongside Competence in Selection, “Character is constantly evolving, both personally and professionally. Thus, a person’s work and life experiences fundamentally shape character, and the story about who someone is and why they have become the person they are is unique to each person.” It will be important for the individual and the organization to attend to the virtues they want to see and understand how different virtues complement one another and how they complement one another.

For each of the items referenced above, if we are not conscious and motivated, we are unlikely to change elements of character. Self-awareness, conscious choice, rewarding context, aligning complementary virtues, practicing virtuous behaviors, and motivation all impact the choice and outcome of the work to build character.

As we wrap up the discussion, I would like to return to the article written by Mary Crossan and her colleagues, “Character is not something that you have or don’t have.  All of us have character, but the key is the depth of development of each facet of character that enables us to lead holistically.  Character is not a light switch that can be turned on and off.  There are degrees, and every situation presents a different experience and opportunity to learn and deepen character.  In particular, and for better or for worse, character comes to the fore when managing a crisis.  No one is perfect when it comes to character, and given that its development is a lifelong journey, we will rise to the occasion in some situations and disappoint ourselves and those around us in others.”

In our current, fast-changing environment, we need leaders who demonstrate character, informed by leadership virtues. Organizations must understand how to build character and also the contexts that inhibit character development.