Insights
You are here: Home1 / Insights2 / Future of Leadership3 / Key Findings from a U.S. National Survey About Leadership 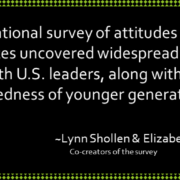 To start or to continue receiving the 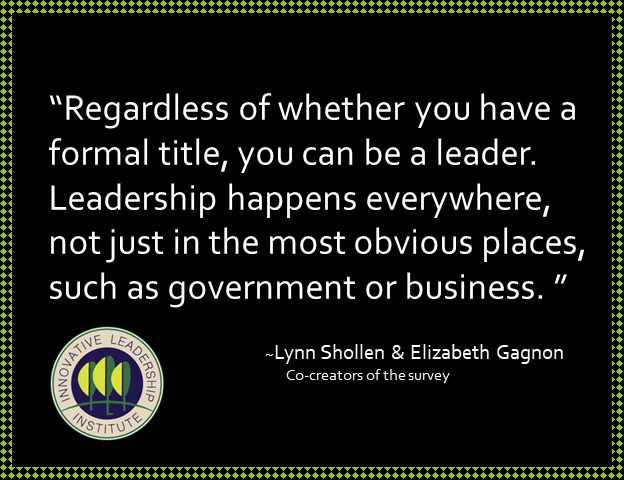 This blog is provided by Lynn Shollen and Elizabeth Gagnon of Christopher Newport University in Newport News, Virginia. It is a description of the top line findings of a survey about leadership that they conducted last year. You can read much more about the project on their website. The blog is a companion to the interview with Sam Wilson and Lynn Shollen that aired as part of the 12-week International Leadership Association Interview Series on Innovating Leadership, Co-creating Our Future. The interview aired on Tuesday, February 11, 2020 titled Research Findings on Attitudes About Leadership.

A new, annual national survey of attitudes about leadership in the United States uncovered widespread and increasing dissatisfaction with U.S. leaders, along with skepticism about the preparedness of younger generations to lead into the future.

Key findings from our scientific online survey of more than 1,800 people include:

These results are discouraging because we know that effective leadership is crucial if we’re to thrive socially, politically and economically. We do detect a few reasons for optimism, but overall, our findings have to be worrisome for our country’s leaders, for leadership educators and for all who care about the quality of leadership now and into the future.

The 1,849 respondents comprise a nationally representative sample based on gender, ethnicity, age, income and other factors. They were asked to think broadly of leaders and leadership rather than focusing on specific leaders or situations. We are not seeking opinions about Donald Trump or Bill Gates. The survey isn’t intended to examine perceptions of how specific leaders are performing, rather how people view the effectiveness of leaders and leadership generally within the U.S.

The survey defined leadership as the process of influencing people toward achieving a common goal, and leaders were defined as people who achieve that goal. Regardless of whether you have a formal title, you can be a leader. Leadership happens everywhere, not just in the most obvious places, such as government or business.

But in many places that leadership happens, it is seen as lacking. Fewer than 25 percent of the respondents say leaders in education, religion, national politics or the environment are effective.

Even as they criticize current leaders, survey participants say they are reluctant to step forward. Only 15 percent of the respondents claim they are involved in leading their community (although they may indeed be leading and not identifying their contributions as leadership). Further, it appears they don’t have high hopes for future generations. Nearly 60 percent of the respondents say younger Americans are not ready to lead and only 33 percent voiced confidence that young people will be able to steer the nation through the challenges ahead.

There is another cause for concern. When the morality of the leader is considered, half (50 percent) claim it is more important that a leader works for major issues that align with those the respondent supports than whether the leader adheres to high moral standards. Thus, half of the sample does not value leaders upholding morality as much as leaders supporting particular issues and agendas.

In terms of what respondents are looking for in leaders, 74 percent believe that the best leaders understand the experiences of ordinary people. About two-thirds believe leaders at the national and local levels should create an environment that supports diversity, considers perspectives of diverse people when making decisions and seeks to take care of the natural environment.

About half also say they’re comfortable with a leader who is different than them in gender/sex (56 percent), race/ethnicity (56 percent), sexual orientation (49 percent) or income level (48 percent). Fewer say the same about religious beliefs (43 percent). Political differences are a bigger sticking point, as only 28 percent say they are comfortable with a leader who holds opposing views, and only 34 percent would follow such a leader.

Participants were also asked where they went for information about leaders and how reliable those sources are for evaluating leaders. Television is the number one source sought for information (55 percent), trailed by non-social media online sources (44 percent). Half (50 percent) of respondents claim that social media (e.g., Facebook, Twitter, Instagram) does not provide them with adequate resources to make accurate evaluations of public leaders, whereas, just over half (53 percent) claim that traditional media (e.g., newspaper, television, radio) does provide them with adequate resources.

The results of the survey were first discussed at the 2019 annual conference of the International Leadership Association in Ottawa, Canada. The researchers received helpful feedback there and plan to delve into the nuances of the data by examining the results by demographics such as gender/sex, race/ethnicity, geographic location, religious beliefs, political affiliation, sexual orientation and income level. These results will be released as they become available. The survey will be conducted annually to track trends and to add questions relevant to contemporary issues.

For additional survey results and information, please visit or contact the researchers at ldsp-survey@cnu.edu

Dr. Lynn Shollen is Associate Professor of Leadership Studies and Department Chair in the Department of Leadership and American Studies at Christopher Newport University. She earned her Ph.D. in Higher Education Policy and Administration at the University of Minnesota. Her research interests include the faculty to administrator transition, identity and perceptions of leadership, leadership identities construction, and teaching about women and leadership. In addition to numerous journal articles, she co-authored the book Faculty Success Through Mentoring: A Guide for Mentors, Mentees, and Leaders.

Dr. Elizabeth Gagnon earned her PhD at Old Dominion University. She is Senior Lecturer in the Department of Leadership and American Studies at Christopher Newport University. She teaches courses in civic engagement, social entrepreneurship, leadership theory and ethics and values in leadership. Journals publishing her research articles include the International Journal of Leadership Studies and the Journal of Higher Education Outreach and Engagement.